Marvel’s first family the Fantastic Four has been absent from comics for years but now that they’re back, Marvel has given a concrete reason for why Reed Richards and Sue Storm fled the universe.

If you’re a fan of Marvel comics then you’re probably aware of that the Fantastic Four have not headlined their own comic in quite some time. There has been much speculation that the superhero team was nixed from the comic book line-up due to rights issues with 20th Century Fox, who owned the film rights to the team. Though Marvel could have released a book starring the characters, many speculated that they hadn’t for that very reason. No worries, because now the team is back headlining their own comic book, which comes with an explanation for their absence.

In the comics, though Ben Grimm and Johnny Storm remained on Earth, Sue and Reed’s journey took a more cosmic turn. After being lost in space, the duo finally returned to Earth and the latest preview for Marvel Two-In-One by Chip Zdarsky, Ramon Perez, and Federico Blee, Reed finally explains why he and his wife left. Check out the preview for the issue below. 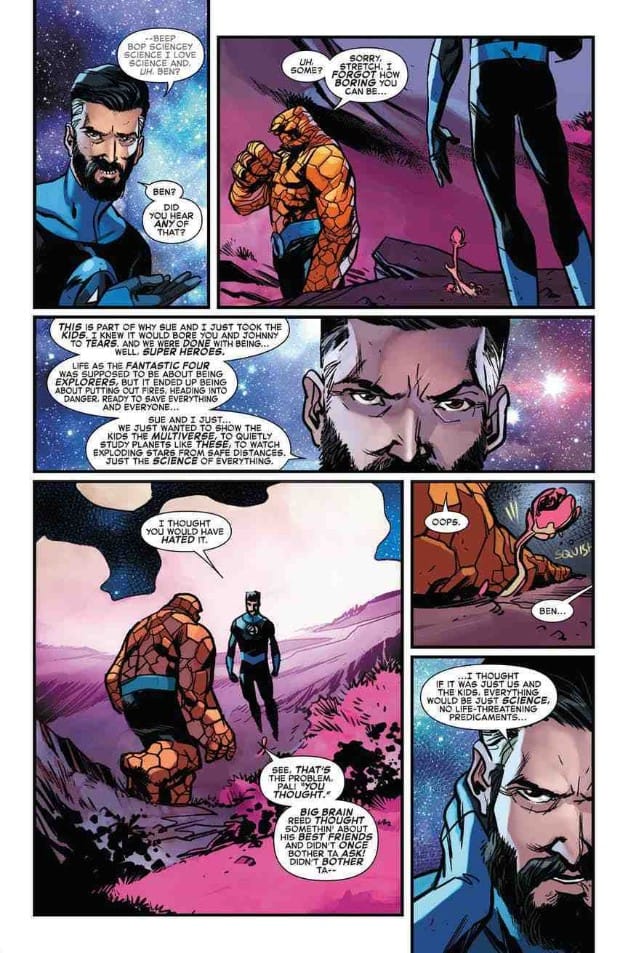 As it turns out, Reed wanted to take he and his family out into the multiverse to embrace the idea of discovery and scientific exploration, as opposed to becoming just another superhero team like the Avengers. This isn’t only an important point for the characters, it reflects what many fans have had problems with when it comes to the handling of the classic Marvel team, especially when it comes to the film adaptations.

We’ll be sure to keep you updated on all news regarding the Fantastic Four as soon as more information becomes available. Are you happy with the explanation? If not, how would you have preferred to see the absence explained? Let us know your thoughts in the comments below!