Telltale Games’ newest project is based on non other than one of the biggest superheroes in the world, Batman. If you’re unaware of Telltale Games, they are a game company focused on delivering games with a choice based narrative story. They are episodic adventures that play out similar to a TV show (if they we two plus hours long), but in these episodes you are given a series of options throughout that help decide how the story will unfold. Actions may be a simple multiple choice on what to say in a conversation or being given a huge ultimatum on two BIG choices that will alter where the rest of the story will go.

This month marks the premiere of Episode 1 of Telltale’s Batman series titled Realm Of Shadows. Accurately named, which we will get into later on. This is the first episode in a series of five which will be released either monthly or bi-monthly (pretty much whenever they’re ready). That’s a popular issue some people have with this format. The wait. If you tend to be impatient it may be a lot better to start this series after all five episodes have completed. Others out there play them as they’re released and get excited over speculation and mysteries that were given with each episode’s cliffhanger. As a comic book/superhero fanboy like many of you I’d like to discuss the great things this first episode had to offer and why I can’t wait for the future episodes. 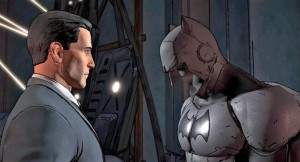 Being Batman AND Bruce Wayne

One of the great things this game has going for it that all the other Batman video games lack is that you’re not only Batman, you’re also Bruce Wayne just as much if not more so. Solving issues in crime and politics as Bruce in some cases can be even more effective than as the caped crusader. Small instances involving conversations with Alfred in the bat-cave or speaking publicly to the press about what you stand for is really a huge breath of fresh air.

As fun as being in the action with Batman is I found myself more engaged when I was molding the story as Bruce. There will be times in this series when you must decide to proceed as Batman or Bruce to get the most effective result in your investigation. 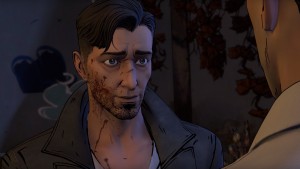 This is an interesting one. Oswald Cobblepot, AKA The Penguin has seen quite a few incarnations over the years, this one in particular has me very curious. In this Batman story it seems Bruce and Oswald (let’s call him Oz) have been essentially friends for lack of a better word since childhood. Oz’s appearance is also quite different from the norm. If anything he has the closest resemblance to Fox’s Gotham version, but with a British accent. Looking at that picture above I would have never guessed that would be the future Penguin.

All that being said this episode is laying some groundwork with Bruce and Oz’s relationship. Bruce seems to be fully aware that Oz is a little mental in the head, but still they have some kind of history together connecting the Wayne and Cobblepot families. Oswald has been off the reservation for some time and is now back to get what he wants, probably as violent as possible. 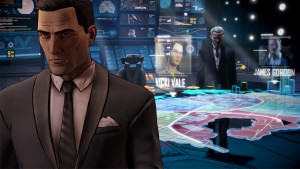 This isn’t the first time gamers had a chance to solve crimes as Batman in video games, but that doesn’t mean there wasn’t room for improvement. When Batman: Arkham Origins was released they designed a really cool new way of figuring out what happened in a crime scene. You look around and identify clues with a visual aid/bat-gadget that (with enough clues) will act out the events of the crime. This game specifically doesn’t branch off too far from that formula.

There is a scene in Telltale’s Batman in which Batman arrives at a loading hanger and there are dead bodies of both criminals and police. Figuring out what exactly happened, you the player will find clues and attach one clue with another to tell a cohesive story. It’s worth noting that this game is actually quite violent and is more liberal with the blood/gore. It’s very refreshing to see more time spent being a detective and I look forward to see how this series will expand upon it.

It’s mostly common knowledge that Batman and Catwoman have a romantic connection. Here we see the first time they meet and it’s actually very early on in the game while it’s still teaching you how to play. Batman sees the feline bandit escaping from a heist and it quickly turns into hand to hand combat. Both parties leave the fight scratched, bruised, and unfortunately for Selina, empty handed.

One of my favorite scenes in this episode is at a cafe during the day with Bruce, Selina, and Harvey Dent. Harvey and Bruce needed to meet up to discuss prior events in the game while Selina was there as Harvey’s date. It’s not until Harvey steps away to take a phone call that things get tense. Noticing each other’s battle wounds from their earlier encounter you could tell this whole time they knew who each other were and seeing them beat around the bush when Harvey was around is very entertaining. When they’re alone though the gloves come off and it’s down to business. Selina is in desperate need of what Batman took away from her during that heist. Her fear and her involvement in this mystery leaves you wanting more.

Harvey Dent, the boy scout DA we all know and love. The mighty has not yet fallen in this story, but when he does he will fall hard. I mean look at him, he’s jacked! Kind of an interesting choice in character design if you ask me, the man towers over Bruce to an intimidating degree. While their heights are drastically different the two men seem to be legitimate friends and you as Bruce do your part to help Harvey get elected as Mayor.

I believe the game is handing you the building blocks to build a substantial friendship with Harvey so be sure to make your choices count when they involve him. A tactic I find brilliant, it’s a way to make the white knight’s inevitable fate as the criminal Two-Face to be THAT much more tragic. Will we see these events occur within the five episodes? Hard to say, but my vote is a confident yes.

A lot of secrets surround our characters in Gotham, the biggest one of all involves the Wayne’s legacy. In an early scene Bruce is having a party at his home endorsing Harvey Dent. Not long after an unwanted guest appears; Carmine Falcone, the biggest crime boss in Gotham. A time comes when Falcone will approach you to have a private meeting in Bruce’s game room.

Here you are given an interesting ultimatum of choosing to involve Harvey in the meeting or not. I chose to have him stay at the party in fear that the media may worry Harvey is involved with the mob. In doing so I may have affected the trust in my and Harvey’s friendship; we will just have to wait and see. While playing pool, this meeting kind of goes as you’d expect from a crime boss at a political party. Falcone is trying to make friends with people higher up on the food chain. Interestingly enough, when the conversation starts to go south for him, Falcone brings up Bruce’s parents and their so-called involvement with the mob.

It’s not until near the end of the game when Bruce finds a photo of his mom and pops doing just that, sitting down with Falcone himself. To make issues worse, the press finds out and the fire begins to spread to all the Gothamites that their most beloved local family, the Wayne’s, may have been just as corrupt as everyone else in the city. 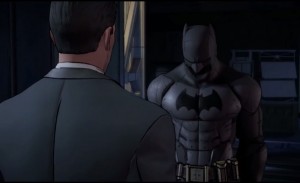 Predictions Of The Future

Realm Of Shadows ends with a distraught Bruce and finding out that even Alfred may have known about this scandal. It seems clear that Alfred’s loyalties ultimately lay with Thomas and Martha Wayne, not Bruce. This internal struggle Bruce endures will be fascinating and nothing we have really yet seen in the world of Batman. There are so many pieces at play here that adding a mission to clear the Wayne name makes all the stakes even higher. Characters such as Oswald Cobblepot and Selina Kyle seemed to have only scratched the surface to their arcs.

All of these factors are why I can’t wait until each episode premieres to start playing. Holding out for the season to end to continue just isn’t in the cards for me.