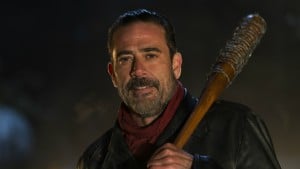 Expect a “larger world” when the The Walking Dead returns for season 7. Writer and creator Robert Kirkman is anxious to unveil what’s in store for the series after dealing with the immediate aftermath of the cliffhanger.

There’s a lot of really great stuff coming. I love that people have been focusing so much on this cliffhanger because it has distracted them from analyzing what happened in the books around that time, and what is possibly coming in the seventh season. It’s pretty great. I mean, Negan has been introduced. He’s going to be this ever-present threat in the show from now on. This amazing 12 minutes that we got in season 6 is going to be nearly every episode now for a while moving forward. We’re going to be expanding the world at the same time. So we’re going to have this huge catalyst, these saviors, this Negan guy walking around doing all kinds of horrible stuff. At the same time, we’re going to be introducing a lot of new characters.

One of those new characters is Ezekiel and his pet tiger, Shivah. Kirkman calls the tiger “game changing”.

This is really just kinda kicking things off in a huge way. This is almost like a second season 1. It’s like a new chapter in The Walking Dead. So I think we’re turning the page, so to speak, and setting the stage for what’s going to become for many, many seasons.

And what about the beloved walkers? Although the landscape seems crowded with the multitude of human factions that have emerged, Alexandria, Hilltop, The Kingdom and The Saviors; the walkers will still have a role to play within this expanded world. Kirkman teases what fans can expect from the walkers this season.

Greg Nicotero and his team at K&B have come up with some really amazing advances in how they are dealing with this stuff. So there’s going to be some really cool new zombies. And we’re going to go in a different direction for that stuff, too.

The Walking Dead will return October 23 at 9 PM EST on AMC.