Avengers: Age of Ultron star Robert Downey Jr. opened up about his return as Iron Man in next year's Captain America: Civil War.

by Michael Bezanidis on December 3, 2015

Entertainment Weekly’s latest issue is packed with plenty of intriguing new details and images from Marvel’s Captain America: Civil War. Following their interview with Black Panther star Chadwick Boseman yesterday, the magazine has now revealed some more details about the film coming from Tony Stark himself, Robert Downey Jr, as well as a still featuring his character next to Chris Evan’s Steve Rogers. 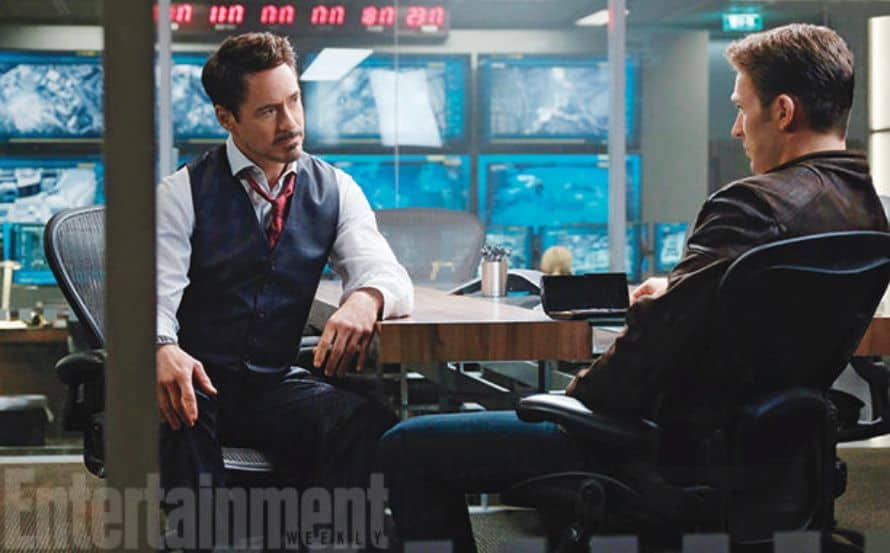 When the first trailer for the movie was unveiled earlier this week, we got a glimpse of a pretty beaten-up Tony, but one thing about his look that stood out to me and many others who saw the trailer was his black eye. While many assumed that it came from Evan’s Captain America, Robert Downey Jr. claims that it came from an entirely different character. Here’s what the actor jokingly said about his look:

While many believe that Tony Stark is a bad guy in the threequel, the trailer made sure to point out that both heroes have their reasons for siding with the government or going against it. For Tony, who is pro-registration, it’s the guilt of causing the destructive events of Avengers: Age of Ultron. Here’s what Robert Downey Jr.had to say about playing the antagonist this time around:

We’ve also got a detailed description of a scene from the movie, which you can check out below.

“An elevator opens in the op-center, and Steve Rogers and his friend Sam Wilson, a.k.a. Anthony Mackie’s Falcon, walk out – with a silent T’Challa (the public identity of Chadwick Boseman’s Black Panther) walking in front of them alongside the government attache played by Martin Freeman. Scarlet Johansson’s Black Widow is with them, and she’s not saying anything either. Something bad has gone down. Cap and Falcon were involved. It did not go well. They have handed over their vibranium shield and flying apparatus before being allowed access to this place. The pair look like they’re being sent to the principal’s office. “You guys want to take a seat?” Widow says. “And try not to break anything while we fix this.” Stark, who hasn’t yet had his beat-down, is on his cell phone with U.S. Secretary of State Thaddeus Ross (William Hurt) as Cap and Falcon step into the nerve center of the intelligence office. “No, Romania was not sanctioned by the accords …. Col. Rhodes is supervising clean-up… Yes, there will be consequences…” Stark looks irritated, tired. “Obviously, you can quote me on that. I just said it.” He hangs up, and beholds his Avengers. “Consequences?” Cap says. “Secretary Ross wanted you both prosecuted,” Iron Man answers. “I had to give him something.” “I’m not getting that shield back, am I?” Cap says. Black Widow walks ahead, joining Stark. “Technically it belongs to the government. Wings, too,” she says. “That’s cold,” Falcon says. Stark spins on his heel as the two walk away with T’Challa. He flashes a tight, unpleasant smile. “Warmer than jail!” he says.”

If you want more from Entertainment Weekly’s interview with Robert Downey Jr., you can head over to the their site by clicking here. Whose side are you on? Let us know in the comment section below.