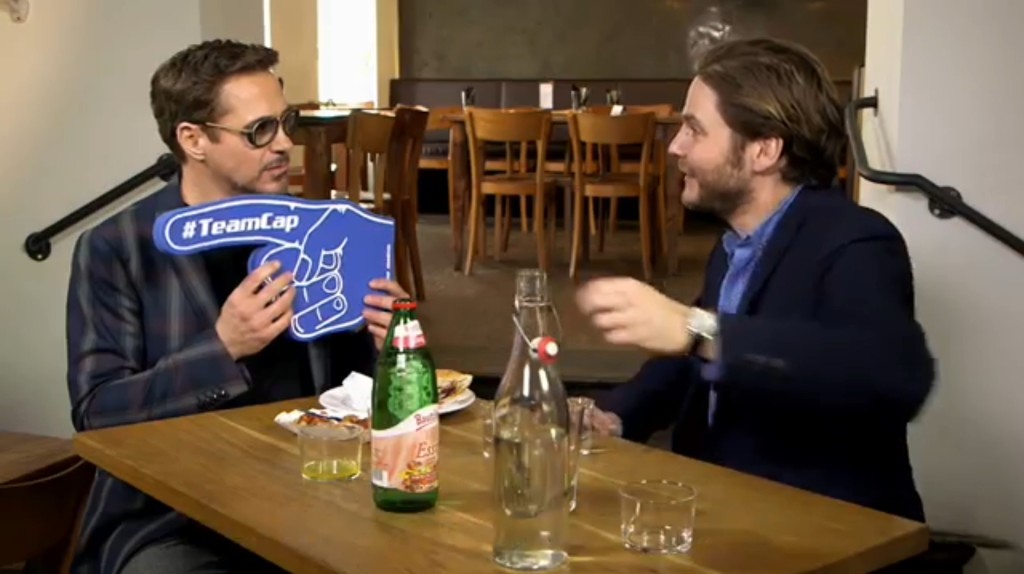 The hotly anticipated release of Captain America: Civil War is right around the corner, so the promotional machine is chugging right along at full steam. So what’s on the menu for today? A trailer? Come on, we’ve already had three. Some posters? Is that the best you can do? The cast of the film sending (sort of) personalized messages to people on Twitter? Been there, done that. How about a video of Robert Downey Jr. being fed inedible objects by co-star Daniel Brühl? Well, now that you mention it…

That video comes from Marvel’s German social media pages, and features ol’ Shellhead himself chowing down on, among other things, a giant foam finger, ping pong balls, baking soda, and a laxative chaser. What’s fun about this video, though, isn’t so much the wacky non-food antics as it is just the playful behavior between these actors. This playfulness has characterized a large portion of Civil War‘s marketing, and in a broader sense is kind of the key to Marvel’s success overall. Whether or not it’s all just a front (and I don’t believe it is), from the outside looking in, you get the sense that all of these guys actually like each other. There’s a feeling of behind-the-scenes camaraderie that bleeds into the films themselves and makes the whole enterprise that much more fun. That’s the reason why people like these movies so damn much; it’s not that they have the best action or the best effects or even the best stories, it’s that we like hanging out with these characters and we like seeing these characters hang out together. They’re not dour slogs featuring characters who barely speak to each other, they’re fun movies with characters whose lives and relationships we’re invested in.

That’s why the conflict at the heart of Civil War is so compelling. We love seeing these characters together, so there’s a real dramatic poignancy to have them torn apart. It might be neat to see Captain America and Iron Man slug it out for a bit, but at the end of the day, we want these guys to be buddies.

We’ll see how it all goes down when Captain America: Civil War hits theaters on May 6. Spoiler: It probably doesn’t involve Robert Downey Jr. eating a foam finger.