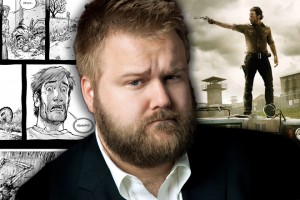 Is Robert Kirkman about to pull a George R.R. Martin? Kirkman, the genius behind the comic series and TV show, The Walking Dead, may do just that.  Kirkman sat down with Greg Grunberg and Kevin Smith for AMC’s new series, Geeking Out. He discusses his long running comic series, the TV series and plans for the future.

The Walking Dead  TV series returns, it will be on pace with issue  #100 in the comic series. The comic series is currently at issue #158 to date, the TV series will be closing in on 90 episodes. Now, the two are not caught up to each other just yet, but Game of Thrones recently posed an unprecedented issue to creatives like Kirkman. What happens when the TV show outpaces the source material?

Kirkman has an answer, and if AMC has anything to do with it, The Walking Dead will have a long shelf-life; a relief and a delight for fans.

If the show were to end ever, at any point and the comic was still going, I would have to sit down with Scott [Gimple] and pretend I have no idea how to end it and come up with another ending.

Kirkman also explains that he hopes that he will be writing the comic series long after the TV series comes to a close, forcing a different ending.

In the case of Game of Thrones, it was never the intention for the show to outpace the books; Martin was unable to deliver and thus, this unprecedented new age of divergence from source material to TV series was created.

That is not to say that shows don’t have differences between their source material counterparts.  The Walking Dead openly has made changes and has done so on purpose, same with Game of Thrones. However, to have to come up with completely new material without a reference is something entirely different.  Martin has at least shared his ending vision for his series; Kirkman says he will not. We will see what AMC executives have to say about that!

The Walking Dead returns to AMC for its seventh season, Sunday, October 23rd at 8/9C.