If you’ve been following the release of Rogue One: A Star Wars Story then you may have heard some rumours/facts/fear-mongering about reshoots taking place this summer. Well Entertainment Weekly recently ran their cover story on Rogue One and had a chance to talk with it’s creators and finally were able to sort the fact from the fiction.

Initially reports were stating that a cut was screened in-house at Lucasfilm and execs weren’t too pleased with what they had, so reshoots were ordered- and extensive ones at that, with the assistance of Tony Gilroy who shared a similar role with director Gareth Edwards on 2014’s Godzilla. According to Edwards this isn’t quite the case;

“I mean it was always part of the plan to do reshoots. We always knew we were coming back somewhere to do stuff. We just didn’t know what it would be until we started sculpting the film in the edit. There’s lots of little things that we have to get, but it’s all little things within the preexisting footage,”

What a great deal of the general audience don’t really know is that almost all major films reserve time and money for reshoots, not because they expect them to fail but because the studios are investing so much money that they want to ensure a quality product and sometimes it isn’t until you’re in an editing room that you realise something could be done to make things better.

Understandably however people were worried at the amount of time scheduled for the reshoots but Edwards was able to explain this also, all rather logically I might add;

“Obviously, you’ve got to work around everyone’s schedule, and everyone’s on different films all over the world, and so it’s a bit of a logistical nightmare. That’s why I think it’s been blown out of proportion a little bit.”

So let’s say for example there’s a scene with a conversation between a whole group and in the editing room you decide “Well actually, I don’t know if we have enough of a reaction from Diego Luna or Donny Yen here.” On a fairly low budget film you might try to find reaction shots from elsewhere in the scene to ‘borrow’ or you might have to do without, however on a film as big as Star Wars and with studio backing from someone as big as Disney you can simply schedule in reshoots to get exactly what you need. The only problem is rather than just bringing your small cast back for a few days, they’ve had to try and work around a large ensemble’s busy schedules to try and fit everyone in and get everything done as properly and efficiently as possible. 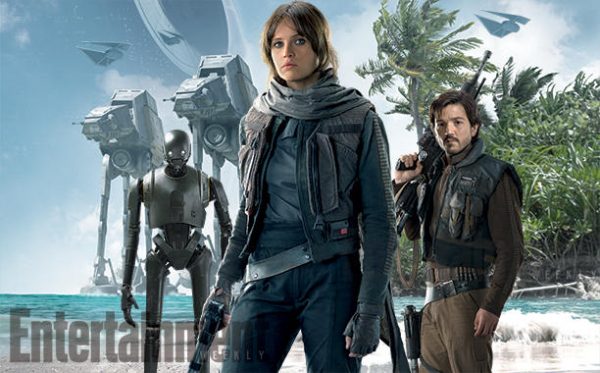 Of course another large concern was that things would be changing from the original story but Lucasfilm head, Kathleen Kennedy, has confirmed that that’s not the case;

“There’s nothing about the story that’s changing, with a few things that we’re picking up in additional photography. I think that’s the most important thing, to reassure fans that it’s the movie we intended to make.”

She went on to explain, in depth, the tone and feel the film will have and if you might indulge me then I highly suggest you read what she had to say because it is so truly wonderful to see a producer speak about her film with such awe and passion that it’s actually quite inspiring.

“One of the things we’re doing with these Star Wars stories is embracing the uniqueness of the different genres, and we’re very deliberately leaning into the various styles of directors that we’re approaching so that each of these movies will very intentionally have a very different tone and style from the saga films. Gareth has shown a stylistic preference that’s much more handheld, visceral, inside-the-action kind of feel. He does a lot of handheld, intimate, close-up work. That’s not something you’ve necessarily seen in a Star Wars movie before, and we brought in [cinematographer] Greig Fraser, to shoot it, who had done Zero Dark Thirty. So a combination of Greig and Gareth has been, I think, fantastic, and it just gives it a really unique style.”

An argument can be made that she is just selling her movie but to me this sounds like someone who cares about the products she tries to create and her fondness of the team she has assembles gives me really high hopes.

Another question on everyone’s lips was what will differentiate these Star Wars Stories (the stand-alone’s or spin-offs) from the Star Wars Saga (Episodes I – VII)? Will we get a crawl? Will it start in space? Will we have ‘wipe’ transitions? Will someone have a bad feeling about something? Well Kennedy (who I’m a huge fan of, if you haven’t guessed) gave a brief insight into where they are with getting the answers;

“We talk about that all the time. It’s something that we’re right in the midst of discussing even now, so I don’t want to say definitively what we’re doing. The crawl and some of those elements live so specifically within the ‘saga’ films that we are having a lot of discussion about what  will define the [stand-alone] Star Wars Stories separate and apart from the saga films. So we’re right in the middle of talking about that.”

I’m going to leave you with a final quote from Gareth Edwards but before I go, remember you can see Rogue One: A Star Wars Story in theatres . May the force be with you. Always.

“A film is a very creative, organic process, and it evolves over time. There’s no right or wrong. There’s just ‘better’ and ‘best,’ and with Star Wars, nothing but the best is going to do. So we’re just putting a lot of pressure on ourselves until the very end, making this the greatest film it can be.”