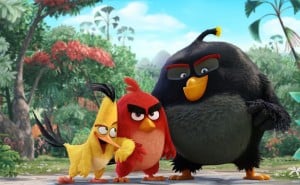 Sony Pictures’ The Angry Birds Movie took the number one spot. The animated film based on the popular mobile app game won the weekend with $39 million while Captain America: Civil War dropped to the number two spot with $33 million. All’s not lost for the third Captain America film: It now has a total domestic box office of $347 million and with international numbers ensured that it’s the fourth Marvel Cinematic Universe film to gross more than $1 billion. Neighbors 2: Sorority Rising premiered in third place with $21 million. Also premiering this weekend, The Nice Guys in fourth place with $11 million, and The Jungle Book ended up in fifth place with $11 million. So it was a pretty good weekend to be a comedy, an animated film, or Captain America.

On the international side: X-Men: Apocalypse premiered this weekend ahead of next weekend’s big release on more than 20,000 screens worldwide in 75 markets. Fox’s mutant sequel of the “First Class Trilogy´ premiered with $103 million overseas. Next week the film premieres domestically, but will also have some competition with films release as well as Disney’s Alice Through the Looking Glass. Both should have great numbers next weekend based on numbers of their previous films.