Zombies in a Marvel movie? Turns out Civil War almost included “zombified” villains, though they wouldn’t have been traditionally undead.

One of the often-heard complaints of Captain America: Civil War was that it lacked a more “powerful” villain in Baron Zemo. But apparently, Marvel did have plans to address this at one point. The Russo brothers, who directed Winter Soldier and Civil War, had a backup plan for the latter film, and it was in the form of our heroes fighting a mass of people made insane by the “Madbomb” from Captain America and the Falcon.

“There was a period where we did discuss a third act that revolved around the Madbomb from Cap mythology. It didn’t have anything to do with Civil War, and if we couldn’t get Downey – in the very, very early conversations before we nailed him – somebody pitched the idea of a third-act that revolved around the Madbomb, which makes people crazy. It almost like zombifies them – but not literally.” 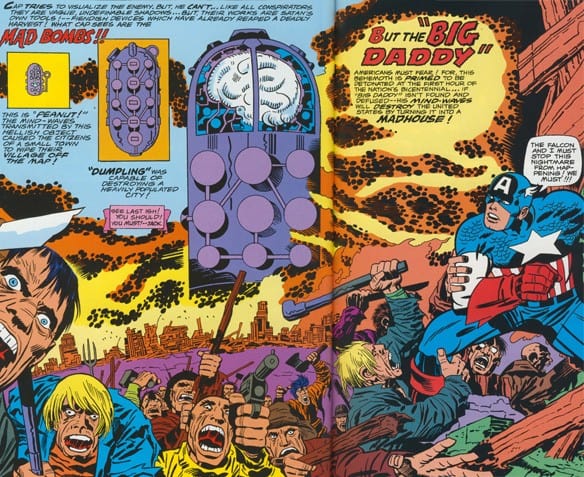 Think zombies that are still living, and a bomb that emits sonic mind waves instead of anything explosive, and that’s about what we would’ve seen in Civil War. Of course, it makes sense that the Russo brothers found this to be perhaps too similar to the mindless hordes of infantry the Avengers have faced off against in other Marvel films. Except this time, the Russos claim Baron Zemo would be behind the Madbomb, rather than the Elite from the comics.

The notion of the Madbomb would have been Cap having to fight civilians and how he would he handle that. We were always trying to put him into these interesting moral conundrums because of his nature. That would have made a compelling third act because if civilians are the antagonists, how could he stop them without killing them?”

Though the Russos abandoned the Madbomb concept, it was later referenced in the Season One finale of Agent Carter, but as “Midnight Oil,” instead.

Would you have liked to see the Madbomb included in Captain America: Civil War?