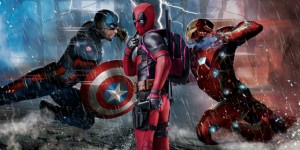 The Marvel Cinematic Universe just expanded by one unconventional hero: Deadpool! If Redditor /u/riceandnori had his way, that would be the case!

A fan video has made its rounds on the internet and social media and has grabbed the attention of Deadpool himself, Ryan Reynolds. Reynolds shared it on his Facebook page, much to the delight of his fans!

The 45 second clip features Deadpool “interacting” with Spider-Man and Captain America. It definitely gives you a feel for what a fun addition Deadpool could be to the MCU and Avengers. Spider-Man and Deadpool make a great pair in the trailer and we see how this humor can mesh well amongst these characters.

Sony and Marvel were able to strike a deal, and bring Spidey into the MCU family. With that we saw the brilliant onscreen addition of Spider-Man to the Avengers in Captain America: Civil War. We will also get a stand alone Spider-Man move, Spider-Man: Homecoming, officially produced by the MCU.

Could Marvel and FOX (who owns Deadpool) strike a similar deal? For now, we will have to settle on amazing fan videos and our own dreams. Here is hoping it can happen! What do you think of the video? Comment below!