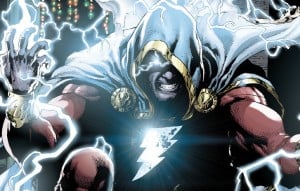 Word on the feature film Shazam, set to star Dwayne “The Rock” Johnson as Black Adam, has been virtually non-existent for some time now. However, the film’s producer Hiram Garcia recently shared a post to Twitter suggesting that an announcement on the film could be coming soon.

In addition to serving as a producer on the film, Garcia is also the vice-president of the The Rock’s production company, Seven Bucks Productions. Now, Garcia has revealed that he had a successful meeting with DC Comics about Shazam and the character Black Adam, hinting that we may hear news on the project soon.

Few details on the film, aside from the fact that it will be based on the DC Comics character Shazam, are known at this point. However, a recent Instagram post from Dwayne “The Rock” Johnson featuring Batman v. Superman: Dawn of Justice star certainly had fans speculating that the Man of Steel could come face-to-face with Black Adam in a future DCEU project.

What news do you think could be coming out way? Share your thoughts below!

Shazam is currently scheduled to be released in theaters on  April 5, 2019.