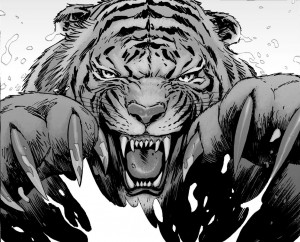 Ever since Morgan and Carol met a new the two men in armor on horseback in the season six finale of The Walking Dead, fans assumed that we will be seeing members of “The Kingdom” and we would eventually meet that group’s leader “King” Ezekiel. If we are going to get Ezekiel, that means we will also get his pet tiger, Shiva. With a semi-trained tiger on their side, it gives them a great tactical advantage against Negan’s group, The Saviors. Some thought this would be almost impossible, due to the fact that having a live tiger on set could cause plenty of concerns, so some thought that Shiva would be scrapped.

It’s been reported that season seven will I fact include Ezekiel, but will also Shiva. Ezekiel has been cast, but there have been no announcements on the character, but they have already filmed up to the third episode of the seventh season of the show. Shiva will be included in the show as a mix of animatronics and CGI. As the tiger is immune from the zombie virus in the comic, he has no problem dispatching them with his bare teeth. Shiva is also expected to be included in The Walking Dead’s Comic-Con trailer this summer.

The Walking Dead returns this fall Sunday nights on AMC