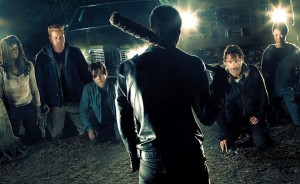 On the heels of the seventh season of The Walking Dead,  showrunner Scott Gimple sat down with EW to discuss the season six cliffhanger, the difference between the comic books and the TV show and where the show is headed. One of the biggest challenges to navigate is how closely to follow written source material when adapting a book or comic book series to TV. Fans of different fandoms appreciate when the TV show follows the source material closely. It can be a risk to deviate too far; however creative risks do payoff if done correctly. Game of Thrones, for example, is facing an unprecedented situation: the TV show is now ahead of the source material.

The Walking Dead toes the line between following the source material and incorporating original creative content for AMC’s adaption of the comic book by Robert Kirkman. Kirkman himself sees the TV show as a remix of the comic books, where as Gimple originally had reservations about deviating from the comic book’s storyline.

As I’ve said a lot of times, it’s a remix. That’s something we proved when I started on the show and [comic creator Robert Kirkman] and I were sitting in the room and I was a writer and producer. I was always wanting to hew as close to the comics as possible, and Robert was wanting to deviate to provide the readers with a new experience. And over the years, I integrated it with my own thinking, as long as we fulfill the spirit of the comic story. We are looking to generate the same emotions and have a very direct interpretation of moments in the book — even if it’s completely different — but still achieving the comic story. That’s what I’ve followed all these years, and at the end of Season 6, it’s very much in line with that.

Each time a change is made, fans give their opinions in droves via social media.  Scott Gimple and Robert Kirkman are not strangers to this, and actually appreciate the fan investment. He addresses this as he talks about the backlash TWD faced when they ended season sixth with a game-changing cliffhanger.

The thing that I find so wonderful about mass entertainment is the possibility of strangers being able to talk —to have some common ground and have something that they’re both passionate about, even if they’ve never met each other before. And it’s very gratifying to me to see stories of people thinking and talking and positing and theorizing. I think that aspect of it is wonderful. Of course, we did not seek to make anybody angry. But we are going to stretch and we are going to take risks on behalf of the audience. All of this is on behalf of the audience.