There has always been a sort of “cold war” between Marvel and DC in regards to which is better. If you check any Internet message board nowadays, there is always a constant Marvel vs DC riff raff between fans, endlessly debating between which comic book, animated series, or big screen adaptations are better between the two comic book powerhouses. For the most part, most fans will watch (and mostly enjoy) both, but it appears there is a difference between the fans of DC and Movie movies, at least according to social media.

Foursquare (and its companion Swarm), the social media application which allows users to “check in” at locations they frequent and share on social media has been data mining then tendencies of fans who frequent screenings of Marvel and DC films and came to some very interesting results. By analyzing the check-ins of fans who saw Deadpool, Captain America: Civil War, Batman v Superman: Dawn of Justice, and Suicide Squad and look at other check-ins the users have made they were able to see other things the fans liked. They compared the results against the average Foursquare user.

Who knew Marvel fans go to the gym more than the regular public? When people think “Marvel Geek,” they usually don’t image someone who does cross fit. Apparently, DC fans really like Barnes and Nobles too. Not online, but the actual store. Who knew Jamba Juice was so popular? Below is a graphic comparing the two Foursquare created. 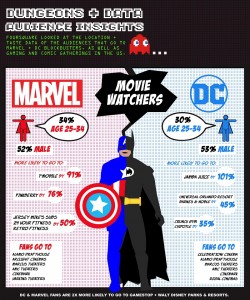 ***Please keep in mind, the sample is ONLY based off of Foursquare and Swarm check-ins and is probably not representative of all fans (since not everyone uses the social media app).