Remember when that image of Taylor Swift alongside the cast of X-Men: Apocalypse started making the rounds? Following that many began to speculate that the pop star could have a role in the upcoming film and perhaps would be portraying Allison Blaire aka the mutant pop star ‘Dazzler’.

However, not long after this speculation began, producer Simon Kinberg denied said rumor but didn’t deny that the mutant could be appearing in the film. Well, a new posted on Twitter earlier today by actress Sophie Turner (who portrays Jean Grey in the film) has once again shined some light on the rumor.

#FBF that time Cyclops and I went shopping at the mall and found our favorite singer’s album (pre 1989, of course) pic.twitter.com/BherKQbE4Z

Sure, just because an image features a Dazzler album cover, it doesn’t exactly confirm that we will be seeing the character debut in the film. However, with Turner also inclduing a reference to Swift’s album 1989, things do seem a bit suspect when it comes to this one. Additionally worth noting is that the actress also tagged Swift in her Instagram post of the same image. 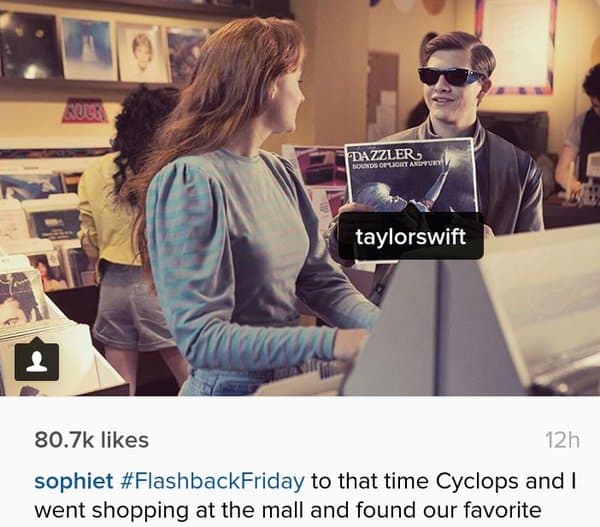 Do you think there’s a chance that we’ll see Swift as the mutant who converts sound into light when the film hits theaters next month? Sound off and let us know what you think about the matter in the comments section below.