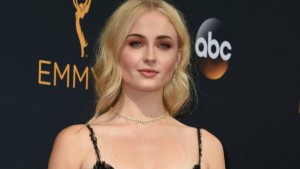 Fresh off a historic Emmy win, Game of Thrones is basking in the limelight.  Its stars are also making the headlines for some of the cryptic messages conveyed on the red carpet regarding Season 7 as we make our way to the end (still can’t process this).

Sophie Turner joined several of her cast mates at the 68th annual Emmy Awards on Sunday night. She had some comments regarding Sansa’s journey in Season 7 as well as the fate of her fellow actors.

I am very interested to see how Sansa handles Jon being King in the North, especially after that exchange with Petyr Baelish.  Will she stay loyal to her brother? She certainly knows how to play the game now and has alliances she can tap into. Turner comments on Sansa’s loyalty and if she will prove to be a “true Stark”:

You don’t really know what’s going on with her this season. We’re trying to figure out where her loyalties lie and you’re wondering if she is going to pull through and be a true Stark or not.

With Game of Thrones entering into its penultimate season, there are bound to be some surprises and deaths (it is Game of Thrones, after all) as we make our way to the end.

It seems the cast is taking the end just as hard as we are. Turner had this to say while speaking to Variety:

It’s quite sad. It really feels like things are wrapping up and coming to an end. People are hanging around Belfast a bit longer to be around each other and be in each other’s presence.

But what about one more season together, Sophie?

“We’ve got one more season…well, not all of us.”

Game of Thrones is currently filming. Season 7 will air some time next summer. Until then, stay tuned here for the latest and greatest in Thrones news. Valar Morghulis.