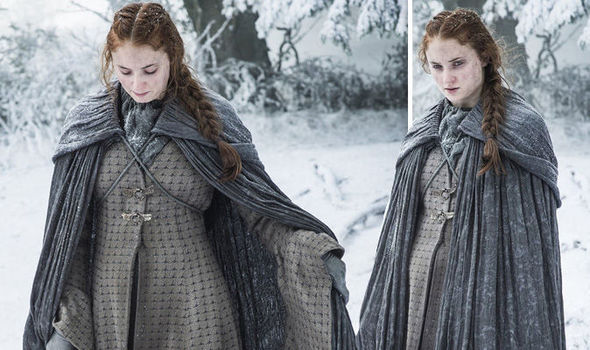 Sansa Stark (Sophie Turner)’s journey on Game of Thrones has been a fairy tale-turned-upside down. Originally hated for her naivety and belief in happy endings, Sophie Turner has magnificently turned the character from foolish princess to hardened player in the deadly political game of Westeros. Turner, who herself is turning into a star with a role in this summer’s X-Men: Apocalypse, told Entertainment Weekly the change has been welcome.

“I’ve had more people saying, ‘You’re my favorite character’ than ever before, which is amazing, because I used to get ‘You’re my least favorite character.’ A lot of fans who recognize me go, ‘I kind of hate you. And I’m all, ‘Cool, well, you’ve just made this sufficiently awkward…’ She’s definitely got a fan base now, and they’re rallying behind her. Finally people see Sansa how I see her.

“This is the season I’m most excited for. Sansa’s coming into her own and standing up for herself.”

Last year saw the most intense phase of the change yet as she embarked on a marriage to Ramsay Bolton (Iwan Rheon), merely the second insane psychopath she’s been engaged to. But in contrast to her experience with Joffrey (Jack Gleeson), she found strength in her terrible ordeal and eventually escape with the help of Theon a.k.a. Reek (Alfie Allen).

It’s a character arc only comparable to perhaps Melissa McBride’s Carol on The Walking Dead and Turner said that Season 6 accelerates Sansa’s transformation from victim to instigator. Her story this year remains a mystery, as both Sansa and the show diverge from the books (Season 6 will be the first season produced beyond the books of author George R.R. Martin). She was last seen leaping from the Winterfell walls with Theon and will have to not only evade the evil Boltons but find a way to reclaim her childhood home.

“Weiss: Sophie really delivers this season. She’s an extremely phenomenal actor, and this year she gets to go to places she’s never gone.”

“Cogman: I’m very excited by where Sansa’s storyline is going this season, and I think Sophie is doing the best work she’s ever done in season 6.”