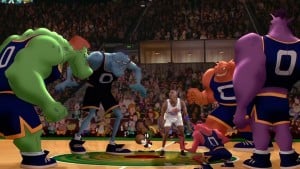 Despite the poor critical reception, when Space Jam was released in 1996 it became a box office success that has become highly regarded in minds of those were young enough to appreciate it. However, some films do not age well as our tastes mature and while Space Jam may hold a soft spot in the hearts of a particular generation, it has now become the latest target of Screen Junkies Honest Trailers series.

The video takes shots at the film for it’s poor writing, Michael Jordan’s less than stellar acting and Bill Murray’s nonsensical appearance in the final act. Basketball fans may also get a kick out of the video’s analysis of the game itself, noting everything from referee’s disregard for the rules of the game to the unsportsmanlike conduct.

You can watch the entire video below!

A sequel to Space Jam is in development with Fast and Furious franchise director Justin Lin attached to direct. While the first film told the story of the team-up between NBA star Michael Jordan and the Looney Tunes as they faced off against the Monstars in a game of basketball, the sequel will reportedly bring LeBron James together with the classic cartoon characters.

Space Jam director Joe Pytka has expressed his objection to the sequel, but how do you feel? Are you excited to see a rematch between the Looney Tunes and the Monstars, or has the original film’s reputation diminished in your eyes? Share your thoughts below!