In the upcoming Spider-Man crossover event, Spider-Geddon, the #0 issue of the series introduced the Spider-Man of the PlayStation game to the Marvel multiverse and possibly opened the door for a sequel.

The upcoming event is acting as a sequel to the Spider-Man crossover event known as Spider-Verse that was written primarily by Dan Slott and was published between November of 2014 through February of 2015. The event itself focused on various Spider-Men from across the multiverse as they battled a race known as the Inheritors. The crossover event ultimately ended with the Inheritors trapped and locked away from the multiverse. But it seems Marvel is not quite done with them yet.

In the upcoming crossover event known as Spider-Geddon the Inheritors have apparently escaped their prison and are poised to take their revenge. In response, Otto Octavius in his Superior Spider-Man alter ego, begins to recruit Spider-Men from across the universe. One of these many web-slinging heroes is the Spider-Man from the latest video game by Insomniac Games for the PS4.

In Spider-Geddon #0 Otto recruits the Spider-Man of the game to aid in his battle against the Inheritors. Peter Parker joins him and leaves Miles Morales to watch over New York City in his absence. When Otto mentions that they should bring Miles along Peter immediately objects stating that he is not ready for such a mission.

You can see the full panel below: 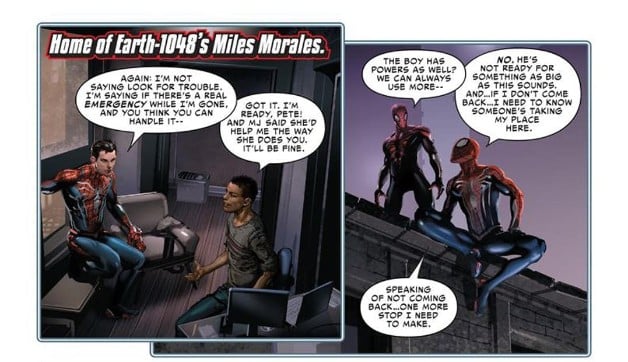 This in and of itself doesn’t necessarily mean anything but it could potentially open the way for Miles Morales to have his own video game as Spider-Man. The PS4 game from earlier this year ended with Miles getting spider powers, showing that the character had a future in the series as a crime fighter. And if they decided to focus a game on Miles this would not be the worst place to start.

What do you all make of this? Should the next Spider-Man game focus on Miles Morales? Would this be a good place for the character to swing in? Let us know what you think in the comments below!

Spider-Gideon #0 is available in stores now!

‘Venom’ Director Explains The Post-Credits Scene & Why He Cast [SPOILERS]