Apparently a 15 year old can now drive in New York City, as Spider-Man has been spotted driving a pretty damn nice car on the set of Spider-Man: Homecoming.

Camila Sanchez and Tom Holland Media on Twitter managed to capture photos and videos from the set of the upcoming film of Spider-Man behind the wheel of an Audi. We’re not sure if this car is the film’s version of the Spider-Mobile, a loan from Tony Stark, or simply a car Spidey took over to prevent an accident. In any case, a 15 year old can’t get a license in New York City so what he’s doing here is illegal– not that anyone knows Spider-Man is 15. You can watch the video and view the images by clicking on the tweets below:

Someone took these on Snapchat in Atalanta and spider-man is in a vehicle
SPIDEYMOBILE? #SpiderManHomecoming pic.twitter.com/cjH5KKUl82

In the comics, the Spider-Mobile sure looked a lot different and was a later addition to the Spider-Man comics once Spidey got a bit older and created as a joint effort between him and the Human Torch. It’s unlikely this car is the Spider-Mobile, but if it is then expect some cool tricks akin to Lola in Agents of S.H.I.E.L.D. or a Bond vehicle. The vehicle even received a revamp in recent issues after being introduced in 1974 and later discontinued. 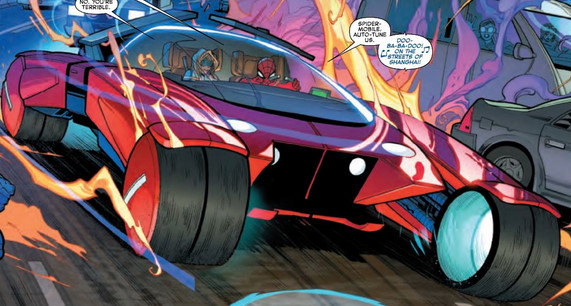 In all likelihood, Spider-Man is simply taking a car for a spin. Why? Who knows, but feel free to speculate down in the comments!