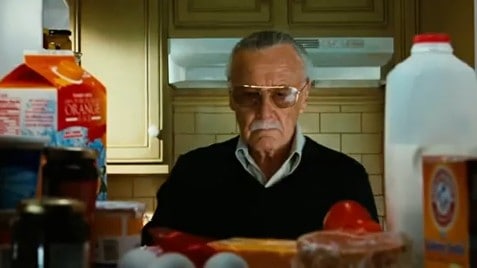 Comic book movie fans have gotten used to seeing Stan Lee make his famous cameos during every Marvel film. We have seen him in a variety of different roles but according to Lee, he has just shot his new favorite cameo.

During Denver Comic Con, Lee reflected on all of his infamous appearances and announced that his favorite is coming up but he can’t provide many details for fans.

“It’s hard to pick my favorite cameo, because as you know, they’re all masterpieces. Unfortunately, this will frustrate you a little: I have a favorite because I can’t tell you what it is because it hasn’t appeared yet….I had to go and do three cameos for three movies at the same time. One of the cameos I did is for…”

It’s likely that Lee will be seen in the upcoming Doctor Strange and Spider-Man: Homecoming. Lee also opened up about Tom Holland being Spider-Man on the big screen and how he is very happy with one of his favorite character.

Lee opened up about Holland taking on the role.

“Oh, he’s wonderful, I was with him the other day. He’s great. I can’t believe it. It’s as if we created a living being to be Spider-Man and it turned out to be Tom. Really!”

Holland will be appearing next in the upcoming Spider-Man: Homecoming. The cast, being directed by Jon Watts, continues to grow and fan anticipation for this film is reaching new heights.

Do you have a favorite Stan Lee cameo? Comment below!