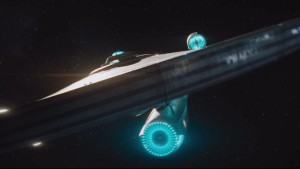 The title Star Trek 4 has reportedly been registered by Paramount with the MPAA, revealing plans for another sequel ahead of the release of this year’s Star Trek: Beyond. The released trailers for Star Trek: Beyond have had mixed reception, so the studio must be confident in the final product of the film if they are considering Star Trek 4 before the third installment’s release. Star Trek: Beyond’s director, Justin Lin, has also received some backlash as fans are worried the new film will be more like Fast and Furious and less like the Star Trek they know and love.

Although Chris Pine and Zachary Quinto have already signed on for a fourth installment, this is the first hint of any concrete plans to produce another film in the series. And a registered title does not necessarily mean the film has been green-lit, but that there are serious plans to make another installment of the film. The production of the fourth film will likely hinge on the critical and financial reception. Should Beyond perform poorly a fourth installment could be held back indefinitely.

With Star Trek: Beyond out this summer, and a new Star Trek series planned for an early 2017 release from Bryan Fuller, Trekkies have plenty to look forward to in the coming months.