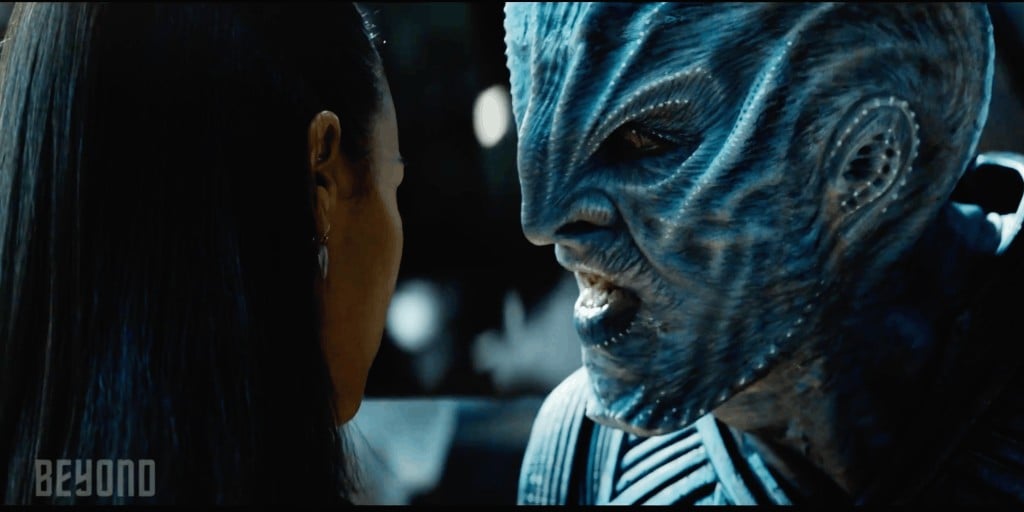 We’re less than two weeks away now from the premiere of Star Trek Beyond, and the Paramount marketing machine is chugging along at full speed. Today, they’ve released another featuretee to get audiences acquainted with Beyond‘s new baddie: Krall.

There’s a lot of talk in this video about Krall being ‘evil’ and a ‘bad guy,’ but that’s not really the stuff that interests me. While Star Trek certainly has a long history of fun villains, they were somewhat rare in the original series. More often than not, the conflict of the episode came from the crew of the Enterprise having to overcome some kind of  external force – a virus that accelerates their aging, a giant space amoeba that could consume the galaxy, or adorable purring fuzzballs that reproduce at an alarming rate. These scenarios allowed the Enterprise crew and their relationships with one another be the focus while also exploring compelling themes about the nature of the human condition.

Once Trek made the leap to feature films, more traditional villains became the standard, but even then, the villains are at their best when there’s some kind of greater purpose underscoring their motives. As much as I like J.J. Abrams’ 2009 film, Nero winds up being one of its weaker aspects. Nero, a man out of time with a thirst for revenge, feels like a villain who was reverse-engineered to be ‘the new Khan’ rather than being an expression of the themes of that particular story (this goes double for Star Trek Into Darkness where they literally just brought back Khan).

What’s most interesting to me about Krall is that he has a very specific point of view. He’s someone who is engaged in an ideological war against everything the Federation stands for, which makes him a perfect foil for Kirk in a movie where he’s questioning his place in the universe and his role as a Starfleet captain. Also, when you’ve got Idris Elba onboard you’re already off to a good start.