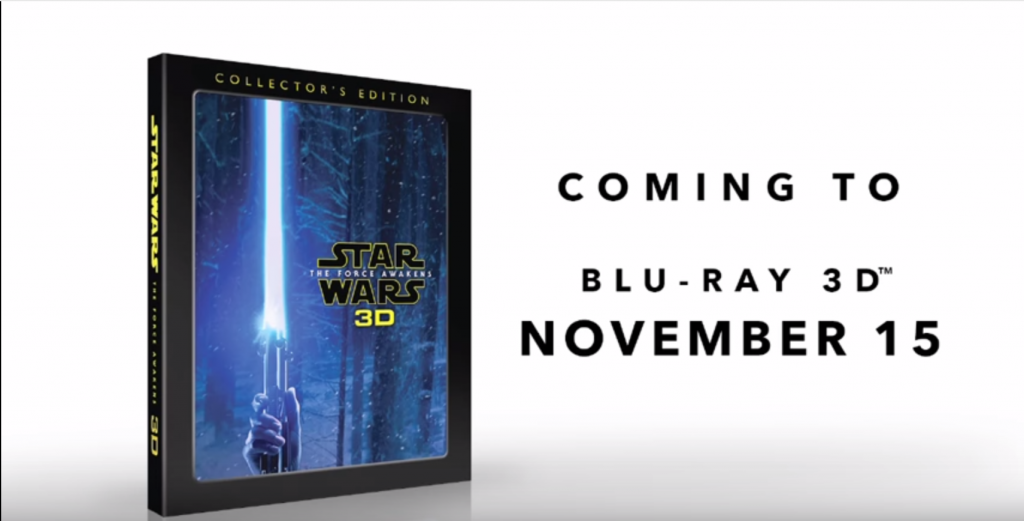 When it comes to Star Wars fans, the dedication that they have when it comes to collecting merchandise related to this galaxy far, far away is almost unprecedented. Fans like myself are so in love with this world that we are willing to double dip for certain editions of the same movie just so we can get all the exclusives and bonus material that we need. Well, thankfully Disney and LucasFilm have announced that a brand new Collector’s Edition 3D Blu-Ray release of Star Wars: The Force Awakens is coming, and it will have new bonus material that was absent from the previous Blu-Ray release.

This new Blu-Ray will come equipped with the theatrical release on 3D Blu-Ray, 2D Blu-Ray, DVD, and Digital HD. Along with the new bonus material, this collector’s edition will come in a new packaging with a new cover depicting one of the film’s most iconic moments: the final lightsaber duel on Starkiller Base. You can check out all the bonus material below.

For fans who were underwhelmed with the previous Blu-Ray’s amount of bonus features, we can now rest at ease with this upcoming release. I cannot wait to see the new deleted scenes as well as listen to J.J. Abrams’ audio commentary.

Star Wars: The Force Awakens Collector’s Edition can be found at retailers on November 15, just about a month before the release of Rogue One: A Star Wars Story.