One would think that after Poe Dameron’s admittedly somewhat reckless actions in Star Wars: The Last Jedi, coupled with him challenging authority, even if it was Admiral Holdo, and getting people killed that he’d be reduced to scrubbing X-wings or polishing Leia’s boots. However, within the pages of Star Wars: Poe Dameron #31, it turns out that Leia may have changed her position on Poe’s actions in the last Star Wars film.

Okay, I’m sure some of you might be thinking ‘Well, it’s a comic book. How much impact could this have on the movie itself?’ Well, let’s find out. In the Star Wars comic, which takes place days after the events of The Lat Jedi, Poe Dameron explains to Leia that the Black Squadron is in danger. Naturally, the pilot wants to go out and help them, but Leia insists that he not put his life on the line. Poe, though, believes this could show that no one gets left behind in the Resistance.

However, given how The Last Jedi ended, the Resistance is all but eliminated save for a few fighters. And Poe believes that this is an even greater reason why he needs to go out and help the Black Squadron. The more the merrier, after all. And indeed, it’s enough to convince Leia to reinstate Poe as Commander Dameron…but also warning him not to blow it this time. Here, have a look at a snippet of their conversation: 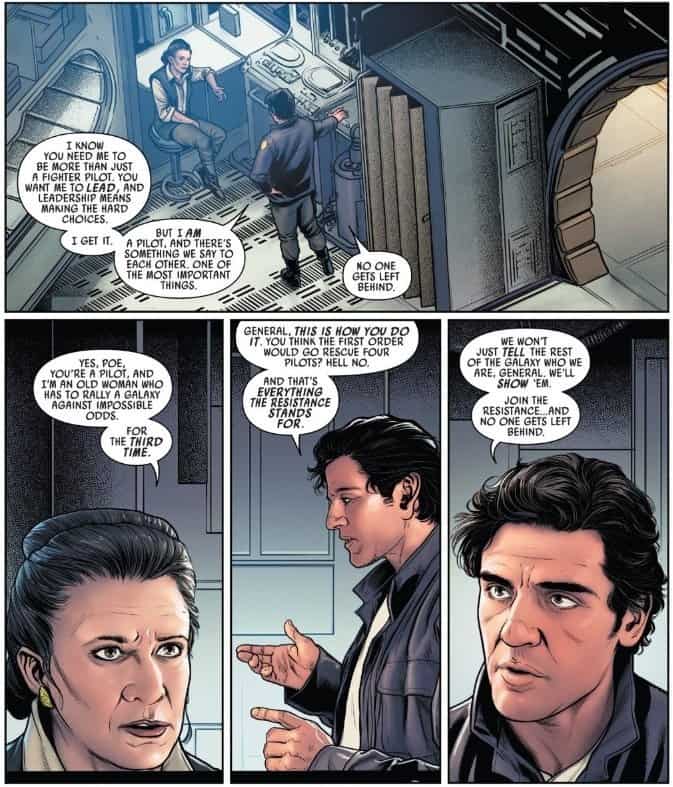 Again, with this being a comic, it remains to be seen whether the effects of this particular storyline will have an impact in Star Wars: Episode IX. After all, while I’m not a betting man, I’d have to assume that Disney and Lucasfilm aren’t expecting the casual moviegoer to read Star Wars comics in preparation for the next film. Same with comic book films, but that’s another discussion.

Either way, as of now, it looks like Poe Dameron has earned his status back as Commander. Should this be the plan for Episode IX, how would you like to see this explained on-screen? And do you keep up with the Star Wars comics? Let us know in the comments below.