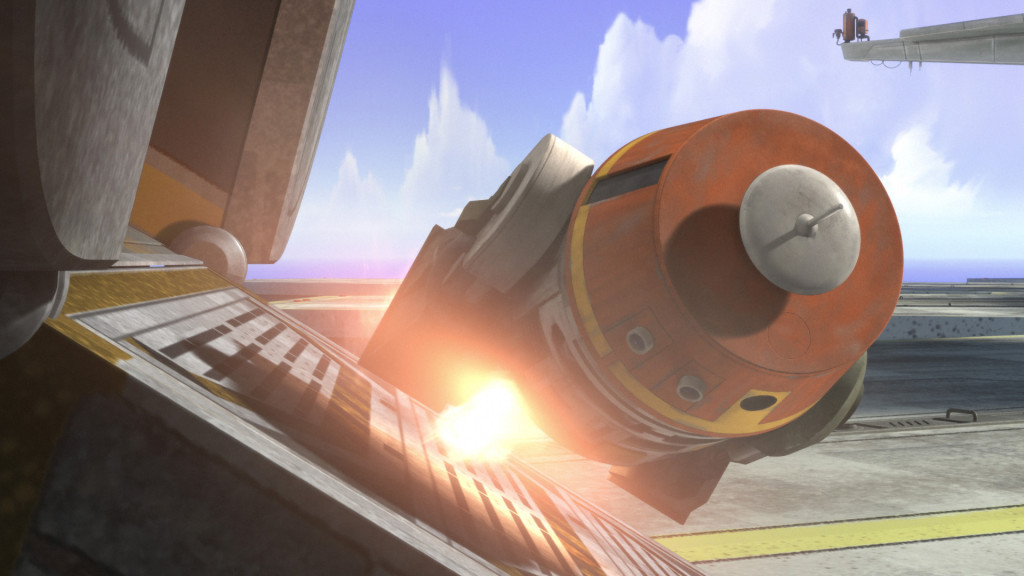 For those of us who have grown up with Star Wars, and have remained fond of the series into adulthood, it can be easy to forget that we’re no longer exactly the intended audience. That statement might ruffle some feathers but it’s true; Star Wars is, and has always been, primarily aimed at children. That doesn’t discount the cross-generational appeal it has always enjoyed, but as adults it’s important to have a certain level of self-awareness about the fact that we’re watching a cartoon made for seven-year-olds. So when Star Wars Rebels takes a break from the high-stakes emotional drama to go on a silly side-adventure with the rebels’ astromech sidekick, I’m totally onboard provided that they do a good job. And – I’m happy to report – they did!

Yes, this week’s episode is all about Chopper – the Ghost crew’s own crotchety old bucket of bolts – and on the spectrum of Star Wars Rebels episodes, this is definitely on the sillier side of things. After spending this entire season searching for a planet that can sustain a permanent base of operations, the rebel fleet believes they’ve finally settled on the perfect spot. In order to get there, first they’ll need to refuel. That’s where the Ghost comes in. The Lothal rebels make their way to Horizon Base to commandeer a shipment of fuel, and while the rest of the crew is off on their adventure, Chopper is left behind to make sure the ship is ready to make a quick get away. Chopper, however, is more preoccupied with a junk merchant on the landing platform who happens to be selling a replacement leg for Chopper’s mismatched struts. While Chopper attempts to haggle with, and eventually steals from the merchant, the crew returns to the Ghost and blast off into space leaving the aged astromech behind.

While I’m totally in favor of Rebels going silly and broad and aiming more specifically at children, their attempts to do so in the past have had kind of a spotty track record. Episodes like ‘Idiot’s Array’ in Season One or ‘Brothers of the Broken Horn’ in Season Two rank among the very worst of the series because they have that fatal flaw of bad children’s entertainment: they talk down to their audience. Let’s be honest, kids don’t have the most discriminating tastes; if it’s bright and colorful and fast paced they’ll watch just about anything you put in front of them. Because of this, a lot of children’s entertainment has this gross, cynical, almost mean spirited quality to it of totally disrespecting their audience and filling up 22 minutes with the laziest, most irritatingly obvious ‘jokes.’ There’s something deeply despicable about that. Yes, children will watch just about anything, but that doesn’t give you a free pass to feed them garbage. You have a responsibility to provide them with something smart and meaningful, and even ‘dumb’ humor requires a great deal of care and intelligence to get right.

That’s exactly the thing that sets ‘The Forgotten Droid’ apart from Star Wars Rebels’ previous silly episodes. On the surface, there’s nothing particularly profound about it, but the humor on display is expertly executed even if it’s all ‘dumb’ slapstick. Comparing it to Chuck Jones’ legendary Looney Tunes is probably overselling it, but there’s a quality to the antics in this episode that harken back to the great cartoons of the Golden Age of animation. This episode is funny! Truly, genuinely funny, and that’s a harder thing than you might think. With slapstick, a fraction of a second can be the difference between a hit being riotously hilarious or thuddingly obvious, and the timing in this episode is really spot on. Because Chopper can’t speak, the comedy here is almost exclusively of the physical variety, but it remains funny every time an Imperial officer’s monologuing is cut off by a slap in the face from a robot leg.

The one weak spot of this episode is pacing. After Chopper stows away onboard an Imperial cargo ship, he runs into an abused inventory droid called AP-5 who befriends Chopper and joins him in liberating the ship from Imperial control. The episode attempts to establish a relationship between Chopper and AP-5 that mirrors the classic pairing of Threepio and Artoo, but in doing so, the action of the episode grinds to a halt while we get filled in on unnecessary backstory about the two droids’ involvement in the Clone Wars. It’s the Anakin and Obi-Wan problem all over again where they try to establish a relationship between characters by having extended dialogue scenes referring to events we were not witness to instead of actually having these characters bond and build a friendship around in-the-moment action. The one aspect of The Force Awakens that everyone agrees really worked was the relationships between these characters, and that’s the model for how these things should be established. Finn and Poe didn’t bond by sitting around talking about their histories, instead, they leapt right into action and established a friendship by being forced to rely on each other to get to safety. We eventually get to something resembling that point with Chopper and AP-5, but the whole middle section where we’re made to sit through unnecessary expository dialogue really sucks the wind out of this episode’s sails.

Things pick up again once Chopper and AP-5 work together to rid the ship of stormtroopers and change course to join up with the rebel fleet. As they’re making their way through hyperspace, AP-5 realizes that they planet the rebels have picked out as their safe haven is actually a trap laid by the Empire. The rebels would enter its orbit only to find themselves staring down the cannons of a half-dozen Star Destroyers. Instead, AP-5 uses his Imperial intel to locate an alternate planet for the rebels to call home. Before they can join up with the fleet, there’s one last confrontation with the captain of the cargo ship and AP-5 is damaged in the process. Chopper not only avenges his new friend, but also sacrifices parts from the leg he stole to repair the inventory droid.

I enjoyed this episode quite a lot. It’s far from perfect, but it’s the best of these type of episodes that Star Wars Rebels has attempted to date. I imagine that after the huge reveals we got in the last episode, some fans are going to whinge about getting a silly Chopper-centric episode as the follow-up, but I say let them moan. I love all of the heightened character drama, but I don’t need the show to operate in that mode every single week. In fact, I think it’d be worse off if it did. The show needs lighter episodes to vary the tone and keep things fresh, and while this may be among the lightest and silliest, it’s no less entertaining and well made. This is a kids’ show after all, it’s okay for it to appeal to kids.