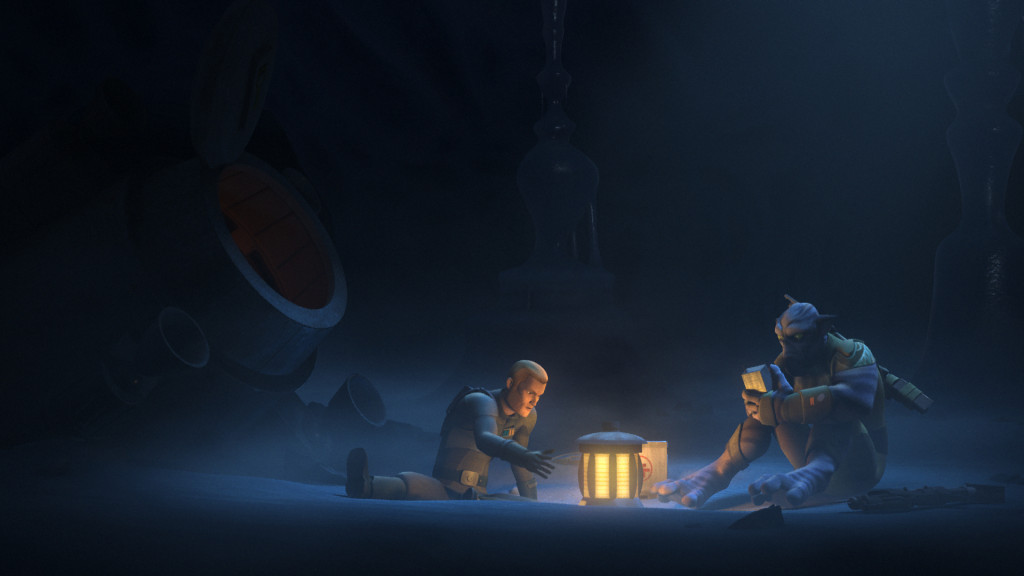 When it comes right down to it, 22 minutes is not a lot of time to tell a story. If you’re splitting said story up into three acts, and you want to, say, show a character having a major change of heart during the second act, you’d have at best ten minutes to do so. Herein lies the problem with this week’s episode of Star Wars Rebels.

In ‘The Honorable Ones,’ Rebels continues the trend it’s been following over the past several weeks by having an episode dedicated to developing one specific character, but instead of Sabine, Zeb, or Hera, this episode sets its sights on a much more unlikely character: Agent Kallus. As the episode opens, the Ghost crew arrives in Geonosis’ orbit to investigate reports of a massive construction project being undertaken by the Empire. If you’re thinking to yourself, ‘hey, I bet that’s the Death Star,’ you would be right! Unfortunately, by the time our rebels arrive, the Empire has already concluded this phase of the construction, and all that’s left are abandoned construction modules and debris. Stranger still, when Chopper does a scan of the planet, there are absolutely no signs of life. No Imperial forces, no Geonosians, nothing. A world that was once septic with life is now nothing more than a lifeless chunk of rock and sand.

I’m not typically big on the idea of mystery for mystery’s sake, and I’ll be the first to argue that the ‘mystery box’ approach is a flawed method that misunderstands that magic trick of storytelling, but here I almost wish we’re never told what exactly transpired on Geonosis. This is the second time that the sterilization of Geonosis has been brought up (the first in the surprisingly solid Darth Vader comic series), and at this point, whatever atrocities each individual viewer can conjure in their own mind are certain to be more horrific than the eventual canon explanation. Still, my curiosity is piqued, especially since they’re now directly correlating the extermination of Geonosis with the construction of the Death Star, As much as I think it’d be better left unexplained, I’m itching to know what happened.

For now, though, the Ghost crew docks on one of the construction modules to see if they can retrieve any intel on what the Empire was building. As you are no doubt expecting, it’s a trap, and as soon as they land, the Lothal rebels are ambushed by Agent Kallus and his stormtroopers. During the firefight, Zeb is separated from the rest of the team, but before he can get away Kallus catches up to him, and the two do battle as their escape pod hurtles toward one of Geonosis’ moons. After criticizing Brad Rau’s direction of space battles back in ‘The Protector of Concord Dawn,’ I have to hand it to him this time. His work here is terrific. The way the battle transitions from ground combat to dogfights is handled perfectly with the geography of the action clearly conveyed and punctuated with satisfying beats that inform and reflect the characters participating.

As great as the action is in this opening sequence, this is not an action episode, and once we follow Zeb and Kallus to the frozen surface of Bahryn, it becomes a much more quiet affair. Kallus is injured in the crash landing, and due to Zeb’s sense of honor, as well as the better angels of his nature, he refuses to kill the defenseless Imperial Agent. Instead, he creates a makeshift splint for Kallus’ broken leg and searches for a source of heat while they wait for someone to intercept their distress signal. With nothing else to occupy the time, these two men talk – about their past, about their motivations, and about their actions on either side of the conflict on Lasan. You’ll recall that Kallus has previously boasted about his involvement in the destruction of Lasan to incite Zeb to anger, but here he takes a more mournful stance. He recalls how he joined the Emperor with all the best intentions, hoping to protect people and save the galaxy from terrorists and revolutionaries, and how on one of his first assignments his entire battalion was wiped out by rebel forces, leaving him as the sole survivor.

This heart to heart between these two warriors is a great idea, and I have to give huge props to Kevin Hopps – writer of many of the series’ sillier episodes – for stepping up to the plate in a big way and really nailing the messy issues of pride tangled up in prejudice and remorse at play here. The biggest problem with this episode, however, lies not within the episode itself, but the series that has surrounded it. For a year and a half we’ve only ever gotten one flavor of Kallus: a man who is wholly dedicated to the Imperial cause and willing to kill without hesitation anyone who opposes it. This is the man who once laughed maniacally as he detailed the slaughter on Lasan, so his complete about-face occurring over the course of ten minutes is a bit hard to swallow. Again, I like the way all of this is handled within the episode itself, but it feels like a payoff to a setup that we were never given. This is a moment that, ideally, they should have been building to at least since the beginning of the season – making a point to give us a small peek into Kallus’ feelings of regret a handful of times before we arrived at this point. It’s just too big a leap to go from remorseless evil to saving the life of your enemy in only slightly more time than it takes most people to shower.

Still, even if the transformation didn’t pack the emotional punch I wished it had, it’s still a fascinating development on a story level, and it was satisfying in its own way to see Zeb and Kallus team up temporarily to escape the creatures (bonzami, they’re called according to the episode guide) menacing them. When the Ghost arrives, Zeb offers Kallus an invitation to leave the planet with them, promising to treat him fairly, but he declines. Instead, he watches from a distance as Zeb is embraced by his crew. When the Empire finally does arrive for Kallus, his reception is much less warm; limping alone through the corridors of a Star Destroyer, the most acknowledgement he gets is a chilly greeting from one of the admirals.

The episode ends with Kallus alone in his quarters, the shot making him appear small and isolated, and it’s clear that this is the start of something. The transformation Kallus underwent in this episode is certain to have major repercussions as the series continues to go forward, but I only wish this transformation had been given more room to breathe. While he may not be the most iconic villain on the show, he is the most consistent. He’s been the nemesis of the Ghost crew from the very first episode, and he’s the only villain who has stuck around as a major player in both seasons of the show. This change of heart is a monumental development for the series, and I only wish the impact of that was felt as strongly as it’s understood.