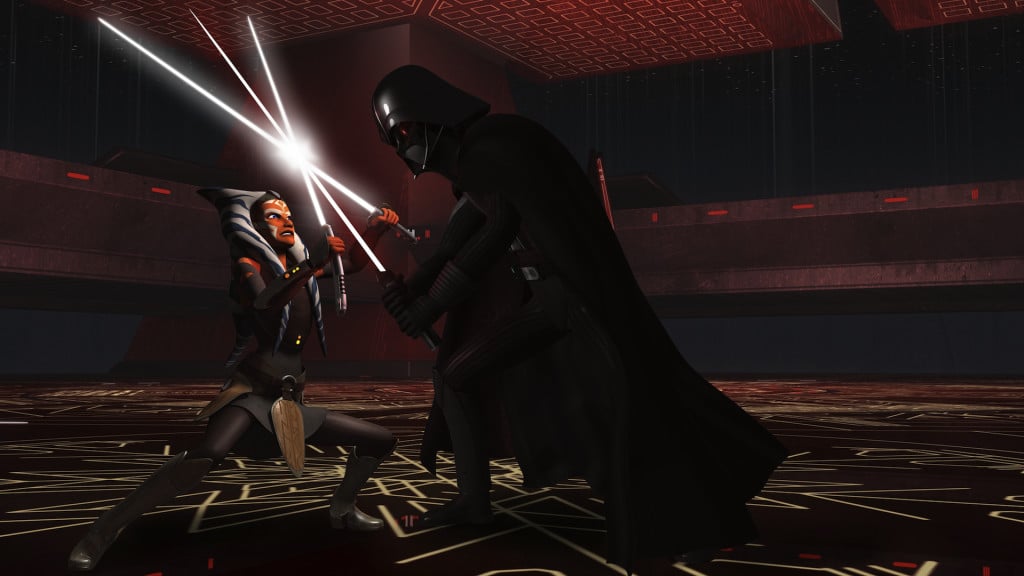 What happens when a creator becomes too attached to their creation? It’s something of a cliché, but there’s truth to the notion that writing stories is more akin to archaeology than architecture. It’s not construction, it’s unearthing something buried, and the more you dig, the more clear the picture becomes. But what if in the process of digging, you find that the story is leading to a conclusion you don’t want? What if, for instance, a character you’ve been writing for years, a character who has become beloved by not only the fans, but by you yourself, needs to die for the story to work; do you have the fortitude to allow the story to go where it needs to, or do you fight against it and try to graft an ill-fitting conclusion onto the story?

Star Wars Rebels’ second season finale comes so close to working. All the elements are there: its atmosphere is dripping with ominous mystery and a sense of dread; it dips its toe into the weirder, darker corners of Star Wars lore without lingering on any of it too long to become a distraction; it reintroduces a terrible, hateful character in a way that is genuinely smart and interesting; and it puts our characters in interesting positions heading into the final conflict… but then it stumbles and all the pieces come crashing to the floor.

Now that the rebel fleet has settled into its new home on Atollon; Kanan, Ezra, and Ahsoka are finally ready to follow Yoda’s counsel and head out to find Malachor. Upon their arrival, the trio of Jedi find an ancient Sith temple, buried under the planet’s surface, surrounded by the evidence of a massacre thousands of years old. It is a place of evil, a place of pain, but it is also a place of knowledge – knowledge of the Sith, of their teachings, that might be used to gain an upper hand against them. But the Jedi are not alone on this world, and as they approach the temple, they encounter an Inquisitor, though for the first time, it’s one who is surprised to see them. This Inquisitor – the Eighth Brother – takes up arms against the Jedi, but they are not the reason he was sent to Malachor. There is someone else here that Vader and the Emperor are seeking, and when Ezra is separated from the rest of the group, he finds out who: Darth Maul.

Or, as the former Sith points out, just Maul. Maul no longer has the status that the title Darth implies. He’s broken and defeated; everything he ever had stripped from him as he’s spent the past seventeen years in exile. Yesterday I posted an editorial that stated in no uncertain terms how much I despise the character of Darth Maul, but the Rebels team has done the unthinkable here: they’ve made Maul interesting. I talked about how one of the big problems with Maul is that we have no idea what motivates this guy. Yeah, he wants revenge, but vengeance needs a motive, and Maul has never had any kind of internal life that would lend pathos to his thirst for retribution. Here, though, there’s something. He’s a man who sought to obtain power, but was struck down by those who possessed more of it. A life spent pursuing power, pursuing revenge, has left him hollow and broken and empty; his allies dead, his enemies out of reach, leaving him with nothing. In a way, Maul is almost the inverse of Ahsoka. Where Ahsoka is a Jedi who left everything behind, Maul is a Sith who had everything taken from him. As he guides Ezra into the heart of the Sith temple, there’s something compelling about his guidance. He’s espousing a philosophy rooted in Sith teachings, and yet the guidance he offers is not dissimilar to advice given by Ahsoka earlier in the episode. There’s a murkiness and a haziness to Maul’s teaching here that certainly doesn’t align with Jedi teachings, but neither does it perfectly fit the teachings of the Sith. Maul here is a lot like Kreia* in Knights of the Old Republic II – neither Jedi, nor Sith, but occupying the grey space that exists between the two.

As the former Sith and the Jedi apprentice progress through the temple, they use their combined power to retrieve a Sith holocron. Without tapping into the dark side of the Force, Ezra is unable to open it, but the device has other uses. Maul demonstrates how the holocron can be used as a key, unlocking and activating parts of the temple that were previously inaccessible. As they make their way back to the exterior, Maul and Ezra find Ahsoka and Kanan doing battle with a trio of Inquisitors. The arrival of Maul causes the fighting to stall for a moment as it becomes unclear who should be fighting who, but Ezra advocates on Maul’s behalf and the Jedi to take up a tentative allegiance with the former Sith.

This creates a compelling, interesting dynamic and puts the character of Maul in a position more intriguing than he’s ever been before. Their motivations for doing so may be different, but on some level Maul wants the same thing the Jedi do – the defeat of Vader and the Emperor and the destruction of the Sith. As they scale the temple, there’s tension between Maul and Kanan as each offers guidance to Ezra, and Ezra has to wrestle with the discord between the two philosophies. The series has shown time and time again that Ezra’s greatest strength is connecting – seeing the good in others and relating to them, and Ezra desperately wants to see the good in Maul. What an interesting dynamic it would have been for Season Three to have the question of whether Maul can be redeemed lingering throughout; to put Maul in a position similar to the one Ahsoka held this season as a recurring character, offering a counterpoint to Kanan’s teachings.** But instead, Maul does a heel-face-turn and reveals that everything up to that point had been a ruse to gain Ezra’s help in activating a super weapon at the peak of the temple. Maul is still the same boring, garbage character he’s always been. What a goddamn waste.

What’s worse is that as Maul slips back into “RARGH, REVENGE!” mode, he steals moments that should have belonged to Vader. When Maul’s true intentions are revealed, he slashes Kanan’s eyes with his lightsaber, blinding the Jedi. This is an incredible development for Kanan as a character, a physical deformation that will lead him to tap into the Force in a more profound way, but having Maul be the one who blinds him ignores the whole structure of the season.

From the moment Darth Vader arrived on Lothal at the end of Season One, it’s been clear that Season Two has been careening toward a fateful showdown between the Jedi and this lord of the Sith. They barely managed to escape with their lives when they faced Vader during ‘The Siege of Lothal’ and when the Jedi returned to Lothal a few weeks ago in ‘Shroud of Darkness’ the threat of Vader underscored every major moment in that episode. And yet here, in the finale, when it’s all supposed to come to a head, Maul takes the spotlight and Vader becomes almost an afterthought. Our heroes return to Atollon at the end of the episode damaged and defeated, but they’re not defeated by Vader, they’re defeated by Maul, who is in turn defeated by the Jedi. It’s a mess. I hate going into ‘imagine if…’ territory because it essentially ceases to be criticism and instead becomes fan fiction, but what a difference it would have made if at the end of the episode Vader defeated Maul, stole Kanan’s sight, and killed Ahsoka while Ezra was powerless to stop it. It would have payed off on the promise given at the very beginning of the season, and it would have given Ezra a really sympathetic reason for starting down the path to the dark side.

But what about Vader and Ahsoka? This part of the episode is almost perfect. Vader confronts Ahsoka, who has convinced herself that there is no way her Master could be the monster she sees before her, and the two of them fight. While the duel never reaches the dizzying heights of the battle with Vader back in ‘The Siege of Lothal,’ it’s still intense and exciting and fraught with emotion as all the best lightsaber duels are. As Kanan and Ezra deactivate the Sith super weapon, the temple begins to collapse. In the chaos, Ahsoka manages to land a blow on Vader carving open his mask, revealing the face and voice of her friend and mentor, Anakin Skywalker. Ahsoka lays down her arms and promises not to leave him, not this time, but Anakin is too far gone to accept his apprentice’s help, and instead vows to kill her. But then, he doesn’t. As the episode ends, and we see the fallout of its events, Vader walks away from the temple as Ahsoka, still very much alive, goes further into its depths.

Ahsoka needed to die. I know a lot of fans with a great deal of affection for the character will vehemently disagree with me on this point, but it is the only correct conclusion to her story. Ahsoka represents the last shred of goodness Anakin possesses, the last tie to his former life, and for Vader to complete his transition to the unfeeling, uncaring monster we see in the original trilogy of films, he needed to stamp that out for good. As much as I like Ahsoka, her story has no purpose divorced from Anakin’s. There’s nowhere left to go with this character, and instead of going all the way and fulfilling her destiny, Dave Filoni blinked, sparing her life but in the process undermining the entire purpose of the journey these two characters went on. Ahsoka exists to humanize Anakin Skywalker, and she needed to die to represent the complete destruction of that humanity. The fans will take comfort in knowing that, ‘maybe Ahsoka is still out there,’ but I weep that the power of this character’s story was betrayed by her own popularity.

Ultimately, this finale is kind of a representative microcosm of Season Two as a whole. It’s bigger and darker and more ambitious, but it’s less focussed, brings in extraneous characters that encroach upon the ones who belong, and regrettably wastes certain elements that could have been incredibly powerful. There’s a lot that works in this finale, but there are a handful of major mistakes that hold it back from its potential.

*Speaking of Kreia, that had to be her voice coming from the Holocron, right? The voice belongs to Nika Futterman who voiced Asajj Ventress in The Clone Wars, but it wouldn’t make any sense for Ventress’ voice to be coming from a holocron that predates her by thousands of years. The role is credited as ‘Presence,’ but when you connect the dots Malachor to Sith temple to Holocron to disembodied voice of an old woman, the picture it outlines seems to be Kreia.

**Wait, am I actually advocating for more Darth Maul? Who even am I?!