The first trailer for Star Wars: Squadrons has arrived online and fans have already spotted a connection to the animated Rebels series.

After EA finally announced their mystery Star Wars game was titled Squadrons, fans have been eagerly awaiting the first trailer’s arrival. The cinematic footage shows off intense dogfights between the Rebel Alliance and the Empire towards the end of the war. While it doesn’t reveal any gameplay, the trailer briefly reveals players will jump into the cockpit for a riveting single-player campaign, before joining up with a squad in a 5-v-5 multiplayer. Watch the Star Wars: Squadrons trailer below.

But with any game set in a galaxy far, far away there’s always bound to be Easter eggs to the wider universe of stories and characters. It seems Star Wars: Squadrons is no different, since Hera from the Star Wars Rebels animated series can be spotted wearing her iconic goggles in the cinematic trailer. After her ship from Rebels, The Ghost, was spotted during the finale of The Rise of Skywalker, fans have wondered when we’ll see Hera, Sabine Wren and Ezra Bridger again. Take a look at Hera in the new game below. 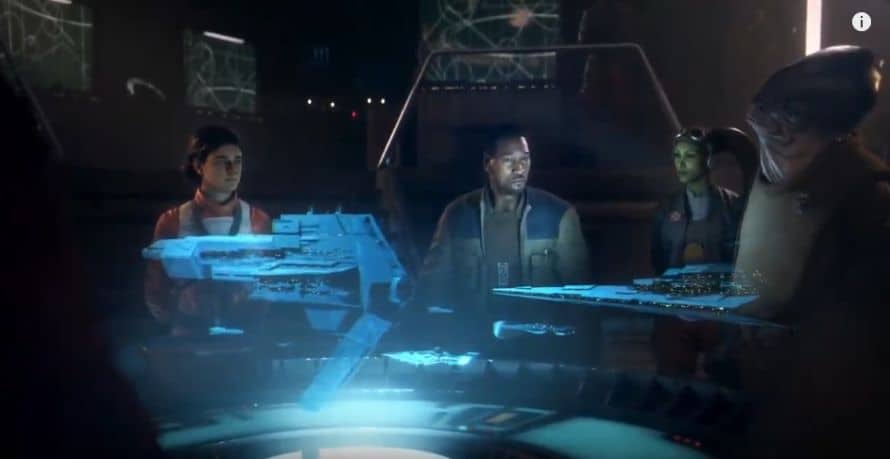 What did you think of the first trailer? Did you spot Hera in the footage? Do you think other characters from Star Wars Rebels will make an appearance in the game? Sound-off in the comments below!

Here’s the synopsis for the next game in the Star Wars universe:

Buckle up, take full control of starfighters such as the X-wing and TIE fighter, and feel the adrenaline of strategic first-person 5v5 multiplayer dogfights alongside your squadron. In a fateful campaign set near the conclusion of the Galactic Civil War, learn what it means to be a pilot in a thrilling STAR WARS™ single-player story. The New Republic fights for freedom. The Empire demands order. We need you to join the galaxy’s finest. STAR WARS™: Squadrons is available October 2, 2020 on PlayStation®4, Xbox One, Origin PC, Steam, Epic Games Store, and Virtual Reality (VR) on PlayStation 4 and PC with cross-play support

Star Wars: Squadrons will be available on PlayStation 4, Xbox, and PC on October 2. Stay tuned to Heroic Hollywood for the latest news on Squadrons as we learn it and subscribe to our YouTube channel for more content in the future!