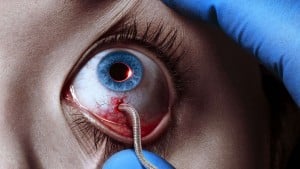 The Strain has been a unique show. Based on the three-part book series by Guillermo Del Toro and Chuck Hogan, the show has shown us vampires in a completely different way. Instead of the supernatural mystery men that we have seen throughout books, TV, and film, the show displays vampires as a biological plague that unleashes bloodthirsty monsters on civilization. The show has blended science as well as the supernatural during its three-season run as they have not only dealt with the vampirism as a disease, but also the mythical hierarchy that surrounds them in the form of The Master and the rest of The Ancients. Originally created to be a television show, was instead made as a series of books (since no one would pick it up as a show). When the books became popular, it became a hit show for FX networks. The show is currently airing in its third season Sunday nights on FX.

Today FX announced that the vampire apocalypse drama The Strain has been renewed for a fourth and final season. When the show was originally conceived for FX, creators Del Toro, Hogan, and Carlton Cuse envisioned a three to five season run for the show. Season one was to cover the first book and the final two books (The Night Eternal and The Fall) would cover multiple seasons. The fourth and final season is set to air next summer. So far they do not have an episode count for the final season. Cuse is happy that the show has been renewed and will give them a chance to complete the story.

“It is a true joy to work at FX where creative intentions always comes first. Our original plan was for the series to last three years. Once we began telling that story it expanded to be more. After finishing the writing on season three, Guillermo, Chuck and I looked at our remaining story and felt the best version could be told in one more season. We have a fantastic plan for an exciting and climatic season four. We are deeply grateful to FX for supporting our vision and for allowing us to end the show on our own timetable.”

“We sincerely thank Carlton Cuse, Guillermo Del Toro, Chuck Hogan and their creative team as well as the fantastic cast for three exciting seasons of The Strain. Though we’re sad to see it go, we fully support the way in which they are crafting the fourth season’s dramatic conclusion.”