A brand new image from the upcoming release of 'Stranger Things 2' on Netflix finds the four young boys from Hawkins, Indiana as Ghostbusters.

One of the first official images released in promotion for the highly-anticipated premiere of Stranger Things 2 was of the main boys dressed up as Ghostbusters just in time for Halloween 1984.

After all, 1984 was the release of Ivan Reitman’s classic paranormal comedy that starred Bill Murray, Dan Akyroyd, Harold Raimis and Ernie Hudson as the four Ghostbusters that saved New York from the powers of Gozer and the Stay Puft Marshmallow Man. It only seems natural that the younger characters in the series watched the film earlier that summer and became obsessed.

Games Radar has released an exclusive image of the four young boys from Stranger Things 2 in their Ghostbusters-attire. From left-to-right, we see Dustin (Gaten Matarazzo), Mike (Finn Wolfhard), Will (Noah Schnapp) and Lucas (Caleb McLaughlin) ready to resolve something strange in their neighborhood: 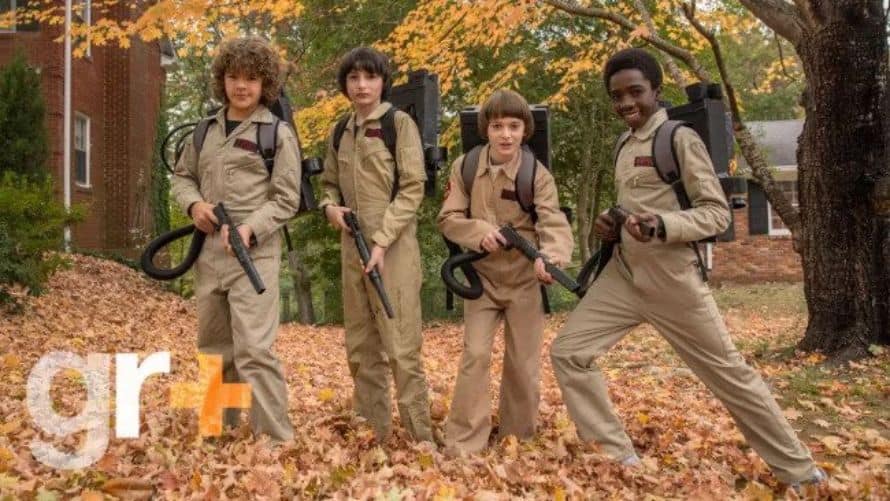 In one of the trailers for the upcoming season, we see the boys along with their new friend Max (Sadie Sink) using a ghost trapping device that looks just like the one used in the original Ghostbusters film. Given that Stranger Things 2 is shaping up to expand on the horror aspects of the previous season, it would be exciting to see if Dustin, Mike Will and Lucas have to become Ghostbusters in their own right to defeat the new threats from the Upside Down.

After over a year of waiting, audiences are now only a week away from the release of Stranger Things 2. Now, fans have another excuse to re-watch the first season for the umpteenth time to build up all the hype for what’s to come for Hawkins, Indiana.

It’s 1984 and the citizens of Hawkins, Indiana are still reeling from the horrors of the Demogorgon and the secrets of Hawkins Lab. Will Byers has been rescued from the Upside Down but a bigger, sinister entity still threatens those who survived.