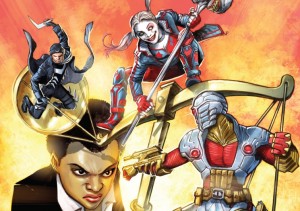 Comic book writer John Ostrander who was responsible for revamping the Suicide Squad in the 1980s which eventually drew inspiration for the Suicide Squad film currently setting records in theaters. The acclaimed writer is back at it as the writer for the upcoming limited series Suicide Squad: War Crimes. In this limited series, the Suicide Squad has to save a retired US Senator who is being charged with war crimes. The series is set to debut August 31st. He recently had the chance to talk about writing for the famous comic book once again as well as his thoughts on the film.

“Amanda Waller seems to be imbedded in my noggin. She came back to me right away.”

“It goes right back to when we first started. I constructed her because I wanted a very specific type of person. I wanted to have some who was female, black, a little bit older and heavier built because there was nobody like that in comics; particularly in the 80s. She just speaks to me. Every time I write her, I don’t have to dig to get her. It’s like she’s saying I’ve been right here, where have you been.”

When I first saw the trailer and when she was there, my goodness, she looked like her, she talked like her and had the attitude. Some of those lines were taken straight from the comics, and I was really happy. Then I saw the movie and I was really happy, because she just nailed it. I even got a chance to meet her, say hello and tell her how much I enjoyed her performance.

For his latest storyline, surrounding the Suicide Squad, he draws inspiration from the real word. In this case specifically from the George Bush Administration and how many around the world thought that he, Dick Chaney, and Donald Rumsfeld should have been charged for War Crimes for their involvement in the Iraq War. He also thinks that using real world events is a great way to have captivating comic book storylines.

“The best fantasy has one foot centered in reality so the reader can identify with it. In this book, I got pictures of where the Squad was. I even found out how long it would take to drive from the prison to the ICC courtroom and what route they would most likely to take. Its little bits like that. If the reader can sense that that’s accurate or that’s real, they’ll trust the rest of the story.”

When writing for Harley Quinn, he actually drew inspiration from actress Margo Robbie. She got her inspiration from the comic book and animated film, and he, in turn, got some of his inspiration for what he saw in the Suicide Squad trailers. A little art meets reality, meets art.

“I had never used her before and of course the dynamic of the team always changes depending on who’s a member of that team, but writing Harley was just a blast. She also came so quickly. I hadn’t seen Margot Robbie in the movie [when I wrote the book], but I saw the previews and that helped me in terms of capturing the voice of Harley. She is just so much fun to write. She’s just like in the movie. Crazy, innocent and lethal. She’s just a fun character to write.”

When discussing the harsh reviews that the film received, Ostrander previously had said: “If Every Superhero Film Is Not ‘The Dark Knight,’ They’ll Bitch.” He was not one to hold back against critics who did not like the film. There seems to be a sharp divide between fan and critics, especially for the DC films that have come out recently.

“First of all, I want to say I am not disparaging any of the critics. I do have problems — whether it’s the Squad or not — when a critic comes in with an agenda already. They are not looking at the movie for what it is. I have read several of the reviews that were just fine, even not that keen on it. As long as they were looking at it honestly, that’s fine. When somebody comes in with an attitude, “I’m sick of superhero movies,” “I am not going to give them a break,” “it has to be a masterpiece to get a good word out of me,” I don’t think that’s right or fair. There were plenty of fans who did not like it, and well that’s fine and they are right to their opinion even if they are wrong. I know the box office isn’t an arbiter of what’s good or bad, but you have to take a look at how much money Squad has made so far. I think it has done really well.”