Suicide Squad devoted a significant amount of time to Harley Quinn. Actress Margot Robbie received praise for her portrayal of the famous comic book character who was the former Arkham Asylum psychiatrist that became infatuated with The Joker and eventually lovers and partners in crime. The film portrayed their relationship as a love affair as The Joker spent most of his time in the film trying to rescue her from the clutches of Amanda Waller and Task Force X. Some criticism from comic book fans was due to the fact that in the comic book, their relationship was much more volatile, with strong hints of abuse and it was not portrayed as so in the film.

It has been reported that Warner Bros wanted to make a lighter and more fun version of Suicide Squad than director David Ayer’s original version, which was much darker. There have been hints of some deleted scenes that show The Joker and Harley’s relationship being much more complicated. An image had shown up slightly edited picture showing The Joker seemingly scolding Harley Quinn. The scene never made it to the film, but the image was just found in Rolling Stone Brazil’s magazine uncropped showing a different side of their relationship. 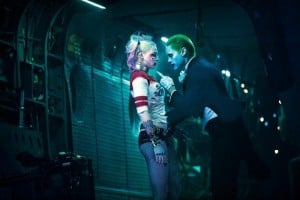 This scene appears to be after The Joker rescues Harley towards the end of the film in Midway City and they go into the helicopter he stole. The body language is very telling as he is scolding her and has her somewhat almost pinned against the wall. Now because the scene was deleted we have no context as to what is going on, but it is very much reminiscent of verbal abuse. This is very mush aligned with how their relationship is in the comics. Perhaps this scene will make it to the Blu-Ray release of Suicide Squad.