Suicide Squad finally hits theaters today and now that most of the hardcore fanboys have seen it from the Thursday showings we can begin to discuss the film and speculate the future of DC Films. For this article specifically we will go in depth on the mid-credits scene of Suicide Squad. That’s right folks, DC finally added some kind of end credits type scene in one of their DCEU films.

Let’s get right to it. Fair warning, if you haven’t seen the film the time is now to look away. SPOILERS! Do NOT scroll down any further!

So we are back into that restaurant where Amanda Waller likes to eat at during her meetings, you know, that one where it’s always raining out the window. Yeah, that one. So, she is having a serious sit down with none other than Bruce Wayne. We not only got Batman in this film but also Bruce himself for about a minute or so. Here is a quick transcript of essentially the entire scene:

Waller: “_____ what I’m preparing for you.”
Bruce: “Listen…I can keep a secret, okay? What do you want?”
Waller: “The people are asking questions about Midway City. The kind of people that want answers, and if they can get those answers, my head will be on a pike.”
Bruce: “Consider yourself under my protection… if you deliver.”

Waller stares a second, then reaches down for a file and hands it to Bruce. He flips through it, showing Enchantress, Flash and Aquaman. He quickly puts the file away.

Bruce: “You should shut it down. Or my friends and I will do it for you.”

There you have it. While the scene was brief it was a very crucial scene to help sow the fabric between DC Films. We now know that Amanda Waller helped point Bruce in the right directions in finding such future Justice Leaguers Flash and Aquaman. In doing so, Bruce may have made a deal with the devil, saying he will help protect Waller from the aftermath of the catastrophic damage that was caused in Suicide Squad. This could bite Batman/Bruce in the ass further down the line. When Waller says “you should stop working nights” it was obvious that she knows about Bruce’s alter ego. With Bruce threatening to shut down Task Force X it is inevitable that this won’t be the end of the two characters butting heads. 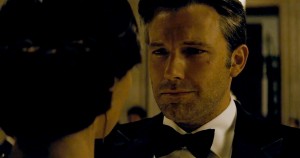