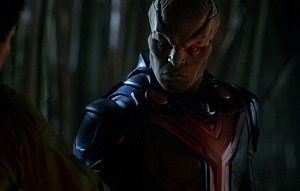 When M’gann M’orzz, played by Sharon Leal, appeared on Supergirl, David Harewood’s J’onn J’onzz was more than ecstatic to meet another Martian from his destroyed home of Mars. While that joy may have dampened by the revelation that M’gann was a White Martian, the species responsible for wiping out the Green Martians, J’onn J’onzz still harbored strong feelings for her despite the discovery. In an interview with Entertainment Weekly, Harewood discussed the relationship between J’onn and M’gann in addition to offering new details on the upcoming slate of episodes.

“It is a bottle episode. Fortunately, we really do have some tremendous acting on the show. It’s great to play something that is so contained and I hope we do it more because it allows you to really play these long, tense scenes where the outcome isn’t specific, in that it could go anyway. I think it’s a really enjoyable thing to play, and the whole DEO becomes a bit of a playground. We get to see areas of the DEO that we haven’t seen before and it just becomes a really exciting episode, almost kind of Blair Witch [Project]-esque where you just never know what’s going to happen next and what’s around another corner. I think they can be really, really fun episodes for the audience to watch.”

Harewood discussed the importance of the group’s collective cooperation.

‘Well, I think that’s what makes the show so successful is that the MVP becomes the collective. We all end up doing our bit to rescue each other, and I think that’s the lesson that we’re left with: If the collective work together strongly, we can overcome anything. I think that’s what the thrust of the show is. Although, M’gann comes through brilliantly at the end and she’s just such a fierce fighter. She’s really, really vital and I think without her, J’onn would perhaps be in a very difficult situation.”

Harewood commented on the relationship between J’onn and M’gann.

“I don’t want to give too much away, but J’onn is trying to protect M’gann. So, he follows her and shape-shifts into different people to kind of make sure he can keep an eye on her, and she’s aware of that. We get some wonderful comedic moments when she keeps finding him as a little old man or something like that. So, there are moments where she knows that he’s following her and trying to protect her and look out for her because he cares for her. I think that surprises J’onn; I don’t think he ever thought he would care for a White Martian, but I think she’s forcing him to confront the reality. I think that’s very destabilizing for J’onn, but also, it’s nice to see him kind of fall for someone. It’s nice to see him have those heart flutters when he sees her. He’s obviously very concerned for her, so those are nice moments. He’s definitely putting himself on the line and you see him [be] vulnerable. We’re not used to seeing J’onn be vulnerable with anybody, but he’s vulnerable with his feelings and it’s surprising to him that he has feelings for M’gann.”

Harewood clarified whether or not J’onn’s feelings for M’gann will become romantic.

“I like to think it’s a little bit more than that. I think her courage, her strength, her personality — I think all of those, perhaps, speak to a feeling he hasn’t allowed himself to feel in a very, very long time. I’m sure people who’ve lost loved ones or know what that’s like when they start feeling for somebody else [know] it’s very difficult to move on from somebody you’ve loved and lost. Sometimes that can be a very difficult decision to make and I think J’onn will experience a little bit of that next week.”

Harewood addressed whether the arrival of M’gann and the next villain of the week, who is also a White Martian, meant that an invasion was imminent.

“Possibly. That’s very possible. I think these White Martians are specifically looking for M’gann to come back and answer for war crimes. But, yes, perhaps it’s the first wave and there could be more because they’re pretty formidable.”

Harewood discussed where J’onn stands on Lena Luthor, especially when Supergirl gives her the benefit of the doubt after her mother, Lillian Luthor, escapes prison in an upcoming episode.

I think J’onn is very astute and I don’t think he’s going to cross [Kara]. I think he believes in Supergirl and believes she’s on the right path, so I think he’ll allow her to make her own decisions when it comes to Lena Luthor. I think he’s always very much about caution and I think he has faith in her. So, I think if she wants to go ahead and trust her, I think he’s prepared to sanction her.”

Harewood discussed the return of Cyborg Superman and why the character is difficult to play.

“Yeah, that goes on throughout the whole of the show. He comes in and out of the next four or five episodes. He’s up to no good, basically. I don’t think it’s the most well-delineated character. That’s the one character that strays, really for me, away from the mythology, and that’s sometimes difficult because I have many questions that aren’t necessarily being answered by the script. So with Cyborg Superman, I pretty much read what’s on the page and just go on with it. At the moment, he’s just a bad guy, but I would love to know why he’s a bad guy, how he became a bad guy, and what are his abilities as this bad guy; those are the things that I really want to start getting into the nitty-gritty of. At the moment, it’s all very much shrouded in mystery, so I can’t quite make any character decisions, because I don’t quite know where he’s from and what he’s about. That’s the one character that’s straying quite far from the mythology in the comic books that we should make concrete decisions about.”

It appears that between navigating his relationship with M’gann and handling Cyborg Superman, J’onn J’onzz will have plenty to deal with as Supergirl season two continues to unfold.

Supergirl airs on Monday at 8:00 PM ET on The CW. Be sure to check back with Heroic Hollywood after each episode for weekly reviews!