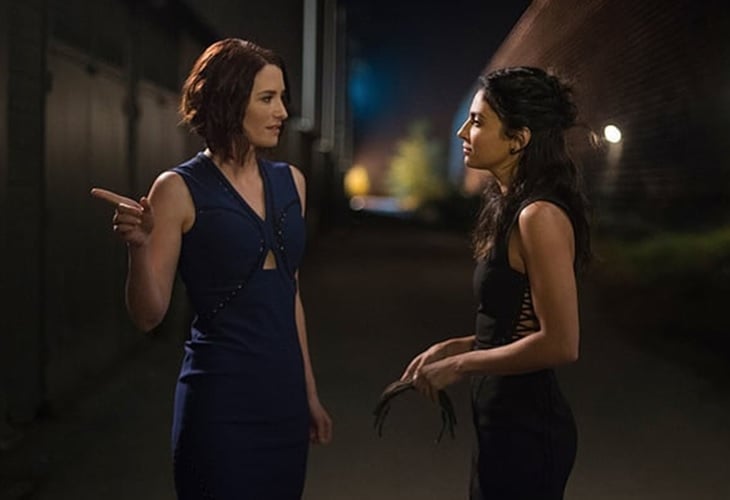 In an upcoming episode of the superhero TV series, we’ll learn more about Maggie’s backstory. According to EW, there will be a small piece of information revealed in this Monday’s episode. The episode will be celebrating Valentine’s Day (a week late); Alex is really excited about it, but Maggie… not so much.

Executive producer Andrew Kreisberg had this to say about Maggie’s upcoming story:

“There’s a storyline coming up where it’s not really about Alex and Maggie’s relationship, it’s more about Maggie as a cop getting caught up in an art heist.”

Sounds interesting and I wonder if that will play into why she doesn’t particularly like Valentine’s Day.

On Monday’s episode, titled “Mr. and Mrs. Mxyzptlk,” Mr. Mxyzptlk, a magical imp, arrives on Kara’s Earth to declare his love for her. Kara, of course, is amused at first, but when she doesn’t reciprocate his feelings, the imp sets his sights on causing disaster in National City.

“DC COMICS’ MR. MXYZPTLK HITS NATIONAL CITY – When Mr. Mxyzptlk (guest star Peter Gadiot), a magical imp, shows up on Earth and declares his love for Kara (Melissa Benoist), she tries to let him down easy, thinking him harmless. However, he decides it’s a challenge and starts to wreak havoc on National City. Mon-El (Chris Wood) has seen beings like Mr. Mxyzptlk on Daxam and knows how dangerous they can be. He and Kara argue over how to get rid of Mr. Mxyzptlk, further straining their relationship. Meanwhile, Alex (Chyler Leigh) and Maggie (Floriana Lima) celebrate their first Valentine’s Day together. Stefan Pleszczynski directed the episode written by Jessica Queller & Sterling Gates (#213). Original airdate 2/20/17.”

Are you excited for Maggie’s backstory? Let us know in the comments!

Supergirl airs on Mondays at 8/7 on The CW.