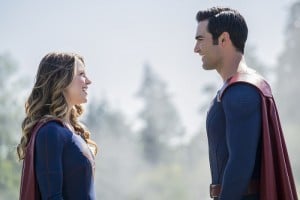 Supergirl makes a triumphant return for its second season in just a few short weeks. On the heels of the return and of the announcement that Superman will be joining up with our heroine, many are wondering just when and under what circumstances we will see the Man of Steel. We can definitely expect these two to save the day; given many of the promo photos that have been making the rounds.

Despite traveling light, Supes arrives in National City with some baggage — namely, a long-simmering dispute over something Hank Henshaw did in the past. Other than that, though, things are easy-breezy for this Clark Kent, who during the course of the Oct. 10 premiere flusters Cat Grant (among others in his cousin’s orbit), checks in with lady love Lois and joins Kara in laying eyes on the “new” (and yet not) DEO base.

Are you excited to see Supergirl team up with Superman? Sound off below!

Supergirl returns for its second season on October 10th on the CW.