Sarah Connor (Linda Hamilton) already stopped judgement day and saved 3 billion people in 1997, but the future is back with a vengeance in Terminator: Dark Fate. Forget about Skynet, as the new threat is Legion, a military AI that goes rogue and ultimately turns on human civilization. With franchise creator James Cameron back in the producer’s chair — he’s even given story credits — Dark Fate is a return to what makes the series so damn entertaining and emotional. Packed with intense, well-choreographed fight sequences, layered performances and a character-driven plot, this newest Terminator film belongs right next to the original two in the pantheon of great action movies.

Skynet may not be the primary threat anymore, but Terminators are still being sent from the past to stop individuals who will cause trouble for the machine uprising. In a twist of fate, killer robots aren’t the only thing being sent back in time though, as Grace (Mackenzie Davis), an augmented human, literally drops into the movie out of nowhere. Tasked with protecting Dani (Natalia Reyes) from an upgraded Terminator (Gabriel Luna), Grace is willing to do anything in her power to keep her target safe. Enhanced but not fully as powerful as a Terminator, Grace’s quasi-Cyborg status is an interesting addition to the world. Dark Fate could have benefited from a more complex look at the ramifications of AI and technology in the present, especially as drones and autonomous weaponry is actually being integrated into militaries now more so than when the franchise originated, but the screenwriters reasonably chose to stick to their guns and focus on moving the story and its entertaining characters from one explosive set piece to the next.

Director Tim Miller, known for helming Deadpool, excels at pulling powerful performances from the mighty ensemble. Not only does each performer get a chance to dominate the screen, they all feel like powerful forces juggling for control rather than characters simply thrown together. The franchise is known for its explosive, tense action scenes and Dark Fate certainly delivers. With intricate chase choreography and brutal hand-to-hand combat sequences, Miller and his production team take a careful approach to the action that makes each scene intense and extremely high-stakes despite the small number of characters actually duking it out. Whether it’s a speedy chase or a close encounter in a border facility, the action never strays far from how the characters are feeling and reacting in each moment. There’s a lot of action moments that deserve praise, but I think seeing Grace smash the new, menacing Terminator — who feels like a nice upgrade to the viscous T-1000 in Terminator 2 — with a hammer is almost certainly going to break the internet in half. 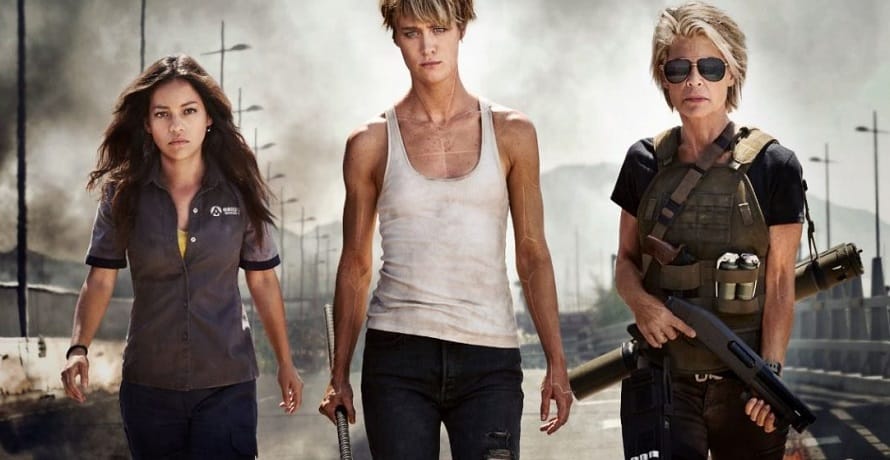 Linda Hamilton, back in all her glory as Sarah Connor, is a sight to behold. Equipped with glares that kill and bazookas to back them up, Sarah is a powerful individual still reeling from the death of her son John decades earlier. Her entire life was defined by protecting him, and now that he’s gone she’s struggling to give her life new purpose. According to her, all she really does is hunt Terminators and get black out drunk, and that sense of emptiness permeates much of her screentime. Hamilton obviously excels in all of the action scenes — it literally looks like she was born to hunt machines — but she also turns in a powerful, emotional performance that shows just how pained the character has become. The sorrow and anger she displays on her face the first time she comes in contact with the classic Terminator is so striking it looks like her heart is breaking all over again and you can see how much she struggles throughout the movie as she is forced to swallow her pride and change her perceptions about the being who was sent to kill her son.

Terminator is in the name of the movie though, so I obviously have to talk about the o.g. himself: Arnold Schwarzenegger. The gray, bearded killer — now going by Carl and living with his wife and adopted son in Texas — has learned how to be a compassionate, dog-loving individual. No longer burdened by a mission to kill John Connor, he was free to develop a life and personality: to explore and determine his own purpose. Sure, he’s still a killing machine with a massive arsenal, but now he’s also a loving man who gives his own life purpose by running the best drapery company he can. Arnold Schwarzenegger turns in a solid performance, firing away dry one-liners and finding a substantial amount of heart in the previously thin role, and it feels like a triumphant return when he finally ditches his cargo shorts and dons the classic leather jacked one more time.

Framing Dark Fate as a sequel to Terminator 2 is a good way to cut right to the meat of what makes the franchise so entertaining, but it also results in Dani being a somewhat hollow character. There’s some time spent establishing her role as a leader in her family unit and at her job that reinforces the idea that there’s something special about her, but up against Grace or Sarah, Dani just seems to fall flat. Yes, it’s important that she is the “chosen one” and not simply a vessel for some future warrior, but at one point Sarah even calls Dani “the new John,” and that’s really all she feels like. While it is entertaining to watch her grow more confident as the world seeming goes mad around her, Dani left me wanting more and I’m not too sure I necessarily need more stories focused on her.

None of the throw away lines are as memorable as “I’ll be back” or “Hasta la vista, baby,” but the dialogue is pretty sharp throughout. Sarah in particular, donning her mirrored shades and leather jacket, has a wicked tongue and has no problem hurling shade at anyone around her. Some of the best lines in the movie come from the classic Terminator himself, as he explains to the others how happy he is to be living a simple life in the country. While some movies packed with jokes can feel overly witty or humorous for no reason, the jokes work especially well here as the characters try desperately to break the tension and pass the time as they flee from a killer robot.

Terminator: Dark Fate delivers everything fans could want from a Terminator movie. Explosive action? Check. Fish out of water humor? Check. Arnold Schwarzenegger kicking ass? Check. While I don’t necessarily need a sequel, Dark Fate spent just enough time developing each character — and subtly setting up future stories — for me to be engaged with their personal journeys. For anyone on the fence, just know that the Terminator has a dog here, and it’s exactly as precious as you think it is. I don’t tend to rewatch many modern movies, but I have a feeling I’ll be back to see this one ASAP.