This week, the Flash delivers what possibly is the pivotal episode of the season’s back-end. In ‘Versus Zoom’ we see Barry and team finally moving forward with a plan to take on Zoom, we see our heroes enact their plan, stumble, and the episode finishes on some pretty heavy results.

The episode opens on the usual narration from Barry, discussing once again the night his mother was killed. As the events are displayed, he begins talking about how being taken in by the West family is what is responsible for the remaining good things that happened in his life following the tragic loss of his mother.

The scene then cuts to Earth-2, and we see a young boy laying in bed being awoken to the cries of a woman coming from another room in the house. Young Hunter Zolomon walks into a room, seeing a solider (his father) beating his mother following a loud argument. His outfit is strikingly familiar to the costume that Jay Garrick wore as The Flash. He stops when he notices the boy enter the room. He tells the boy to watch, gives the boy his helmet, and then proceeds to kill the woman in front of him. Moments later we see Hunter, holding the helmet tightly, being abandoned at an orphanage. The orphanage is a bleak, depressing atmosphere, and we begin to see what made Hunter Zolomon turn into Zoom.

The episode then shifts to the present day on Earth-1, Barry is now using a tachyon enhancer thanks to the advice of Eobard Thawne as a means to try to make himself faster. As he runs,  he briefly vanishes into a Breach and immediately reappears (Insert Supergirl/Flash Crossover Episode), with his friends revealing that he was now traveling four times as fast as he’s ever ran before. When he enters Star Labs he demands to know how long he was gone, but they reveal it was only a moment. Barry then asks Wells to work on decreasing the size of the tachyon enhancer. He agrees, but once again tells Barry that he doesn’t want him to open a breach, confront Zoom, and put the people they all love in Zooms reach. Barry responds that they can’t simply turn their backs on anyone in need, but they resolve with the understanding that Wells won’t help him find a way back to Earth-2.

As they all begin to depart, Iris tells Caitlin that she has to leave to go on a date with her editor, Scott.

Later hat night, Joe and Barry are sharing beer and pizza (which Barry remarks he got from Keystone City), once again discussing how Joe agrees with Wells regarding his remarks to not interfere. Wally then walks in and joins them, stating he was simply bringing his laundry home to wash. After a brief discussion about school, Joe offers to help him with his room and board bills but Wally declines his offer to help. As Wally leaves the room, Joe makes a comment to Barry about Wally’s doppelganger likely being this way, his comments strikes inspiration within Barry. 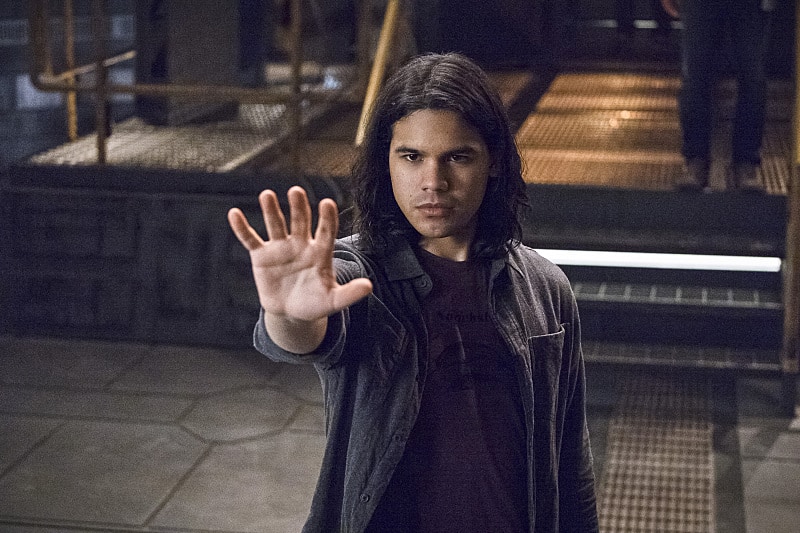 The scene then cuts back to S.T.A.R. Labs, Barry is now asking Wells for more information about Cisco’s Doppelganger Reverb. He believes that if Cisco is able to hone his powers, he can open breach that will lead him back to Earth-2. Cisco makes his first attempt to use the powers he saw Reverb display in the breach room, but fails to generate a breach.

The scene cuts back to the West household, Wells arrives to ask a favor of Joe, feeling that he may be in the way Wally excuses himself, leaving Joe and Wells to speak. Once their alone, Wells first asks about the status of Jesse, but then with a request that Joe help him stop Barry from attempting to get back to Earth-2. Joe admits to Wells that he doesn’t like it, but he knows from experience that Barry won’t let it go. The conversation concludes with Joe now asking Wells to go with Barry and help him, because he believes that is the only way they will be successful in stopping Zoom.

At a worn down hospital, Barry and Cisco successfully track the point where the breach with the most residual energy lies.  Barry asks Cisco again to attempt to open the breach, but once again fails. Then Wells arrives. He now offers his support, and gives Cisco his goggles, which should give him enough energy to open the breach because they have now been modified by Wells. Suddenly the scene cuts to Earth -2, Zoom can sense the opening of the breach and runs toward it. “Keep Coming” he exclaims, but Cisco suddenly gets scared and stops, closing the attempted breach.

The group returns to S.T.A.R. Labs Wells is now installing the new (and smaller) tachyon device when Joe and Iris arrive. Caitlin meets with Iris, and Barry tells Joe that what Wally really needs right now is to simply have a dad and that Joe should offer to let Wally move in with them. Iris and Caitlin talk in private. Iris reveals that she broke her date off with Scott because he now understands she is destined to be with Barry.

The scene cuts to the West house, Wally arrives and finds Joe setting up a room for him. Joe explains his reasoning, Wally accepts his offer, and finally calls Joe dad.

Back at S.T.A.R. Labs, Cisco is working on the goggles when Barry walks in, clearly wanting to talk about what happened. Cisco tells him he feels like Anikin Skywalker, and that he is worried that because he has this immense power within him, that he will end up turning evil like Reverb did. Barry tells him that whenever he learned about a new power, the power scared him, but because Cisco was always there for him, He will continue to always be thre for him in return. Cisco is relieved and agrees to help them go after Zoom.

Before they make another attempt to breach into Earth-2, Caitlin mentions that Jay’s Earth-1 dopple was named Hunter Zolomon. Wells interrupts the conversation, revealing that on Earth-2 Hunter Zolomon was a notorious serial kiler. Wells explains what happened with Zolomons mother, and how he must have gained his powers. Once Barry learns this information, he tells everyone that he has an idea how to stop him.

The team then splits into two groups, Wells Joe, Iris, and Caitlin hide in The Reverse-Flash’s Time Lab, while Barry and Cisco attempt to open the breach at the abandoned hospital. Once opened, Zoom leaps out of the breach. He was clearly waiting for them.

After a brief exchange, Zoom chases Barry throughout the city. Every time Zoom begins to nearly catch him, Barry speeds further away. The tachyon device is working. Barry successfully leads Zoom to S.T.A.R. Labs, where the rest of the team is waiting to spring the trap.

In a large room, full of prearranged obstacles, Barry begins to taunt Zoom in an attempt to get him to flurry around the room. As soon as he approaches one of the obstacles, a life-size pop up of Hunter’s parents appear. After Zoom encounters both of his parents, Barry shoots him with an electrified Boot that drops Zoom to the ground. Barry tells him that they would have helped him, that he didn’t have to do all of this, but Zoom tells him that they are not so different, and that Barry could have easily turned out like him because of what happened to his Mother. Zoom tells Barry that family is a weakness, and when Barry objects, Zoom breaks free and runs out of the building. Barry attempts to chase him into the city, but Zoom is gone.

Barry, Iris, and Joe return to the West home, only to find that it is in complete disarray. Wally is missing, and a note is written across the wall: “Your Speed for Wally.” The scene then cuts to Zoom. Wally is chained up, and Zoom telsl him that the Flash  is the only person who can help him. When Wally objects because he asks why the Flash would do that, Zoom responds “Someone he cares about, cares about you.”

Back at home, Iris, Joe, Barry, and the rest of the team are trying to devise a way to rescue Wally without having Barry surrender his powers. Joe cuts them off, saying he needs everyone to be quiet. Once he excuses himself, Barry follows him and tells him that he will give Zoom what he wants, and he will surrender his power to save Wally. After a bit of fatherly opposition, the team allows Barry to make this sacrifice and Cisco Vibe’s a message to Zoom through holding onto Jay’s helmet. 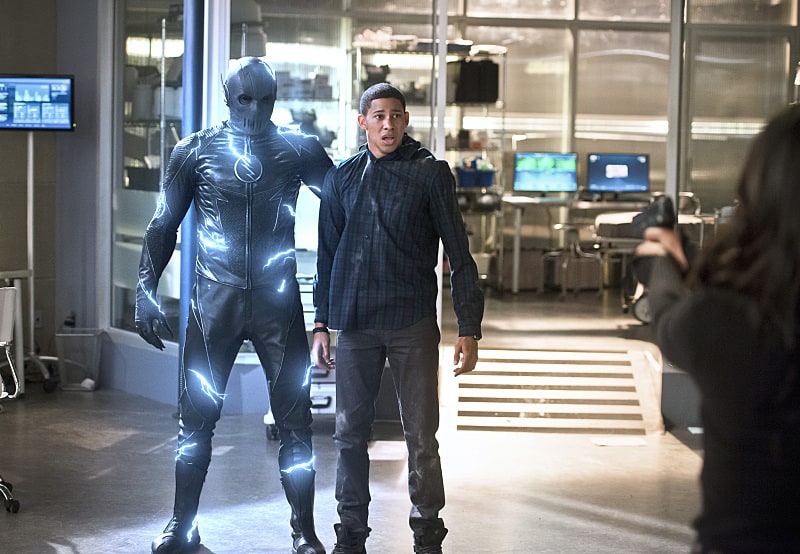 Zoom arrives, with Wally in hand. As agreed upon, he returns Wally to the group. Wells explains that they will use the Speed Siphon, and while the preparations are being made, the others begin to quiz Zoom on how he pulled all of this off.

Zoom explains that the Jay they knew, and that he killed, was actually a Jay from another timeline. He admits that Jay had a hard time agreeing to being killed, but once he heard what Zoom was planning, eventually he saw the light. When Barry asks Zoom who the man in the iron mask was, Zoom replied that they wouldn’t believe him if he told them. Caitlin then interrupts and calls Zoom a monster, which cases him to flashback to when his mother called his father a monster right before she was murdered. 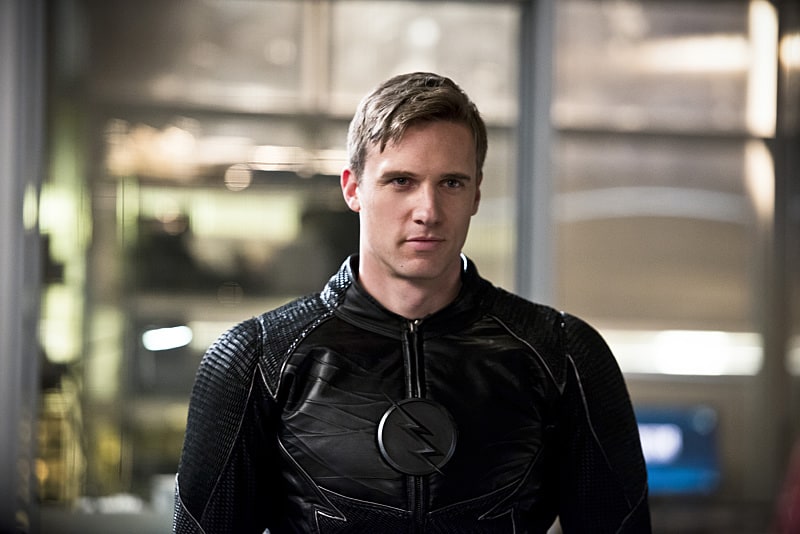 Wells then tell everyone its time, and Barry heads over to the treadmill as a means to fill up the speed siphon. Shortly after Barry begins running, the Speed Force leaves him and the siphon begins to fill. Wells hands it to Zoom, who immediately injects himself with it. Burning with new power, Zoom attacks Barry and attempts to kill him. Caitlin begs him to stop, which results in Zoom letting Barry go but taking Caitlin instead.

Zoom speeds away with Caitlin in hand, leaving a powerless Barry helpless to stop him.