After weeks of waiting the identity of the mysterious Zoom has been revealed. His identity isn’t the front runner of theory’s that have been circling the Internet. He isn’t Henry Allen, Barry Allen nor is he Eddie Thawne.

The last time we saw Zoom he was phasing his hand through Jay Garrick, presumably killing him and bringing him through the closing breach to Earth-2. This weeks episode dealt with the aftermath of Garrick’s “Death”. Barry basically deals with the villain of the week and at the end of the episode they flash to Zoom, zoom walks in his lair with a lifeless Garrick and removes his mask.

Zoom is none other than Teddy Sears the actor who plays Jay Garrick. I’m beggining to believe that Zoom is DC Comics “The Rival”, who happens to be Jay Garrick’s mortal enemy that also resembles him. 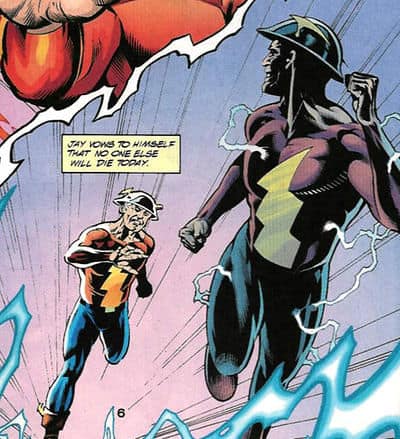 What did you guys think of that reveal? Did it surprise you or have you known all along? Sound off in the comments section and stay tuned to our full recap with spoilers tomorrow morning.

The Flash returns next week Tuesday at 8|7c only on the CW!