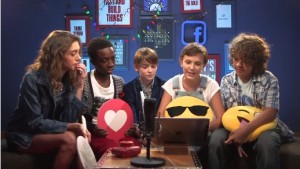 Unless you have been living under a rock, you’ve streamed Stranger Things on Netflix. The show quickly gained massive fanfare primarily through word of mouth since it was released on Netflix in July. The supernatural horror TV show was well received for many reasons. One reason was it was the perfect 1980’s throwback and paid homage to many of the classic films and TV shows from that time. Another strong part of the show was the kids featured on the show. If they weren’t authentic and acted well, then no one would have been sold in it since they were the stars of the show. Yesterday it was announced that we will be getting a second season and we even got a few details as to what’s in store for the second season.

Speaking of those adorable kids, the stars of the show Millie Bobby Brown (Eleven), Natalia Dyer (Nancy Wheeler), Gaten Matarazzo (Dustin Henderson), and Caleb McLaughlin (Lucas Sinclair) recently sat down and hosted a live Q&A on the Stranger Things Facebook page where they all tested their 1980s trivia.

Given that they weren’t even born during that time, it was interesting to hear some of their answers and surprising when they got some of them correctly. The kids also talked about watching various 1980s films to prepare for their roles on the show. Some of their favorite shows include The Goonies, ET, Stand By Me, Pretty in Pink, and Sixteen Candles.

Stranger Things Season Two will be back on Netflix in 2017.