As a kid, I watched The Lion King constantly, restarting it once the credits hit until my parents would plead to watch something else or hide the tape. So, seeing Disney’s live-action remake, with my mom by my side, was quite the nostalgic, breathtaking ride. Luckily, even for people who may not have grown up obsessed or even familiar with the story of Simba and Pride Rock, director Jon Favreau and screenwriter Jeff Nathanson have crafted a fantastic film that is likely the best of Disney’s live-action adaptations so far.

To bring the iconic savanna to life, Favreau assembled an extremely talented cast. Donald Glover brings adult Simba to life in a way that really shows how conflicted and self-conscious the exiled ruler is, but it’s actually JD McCrary as young Simba who does the best job bringing the character to life. The curiosity and anguish in his performance come through in each scene and the 11 year-old actor has a lovely voice that serves him well during his musical numbers. Beyonce as Nala sounds like great casting, but I don’t feel like she ever truly makes the role her own, instead feeling like a glorified cameo despite the fact Nala is a prominent character. Shahadi Wright Joseph, fresh from her starring role in Us, does a wonderful job bringing young Nala to life in a way that makes her seem brave but also aware of her own limitations. Don’t get me wrong, hearing Glover and Beyonce belt out Can You Feel the Love Tonight? will send goosebumps up your spine, but the intensity of their musical performances are never matched in their other scenes.

As good as the previously mentioned performers are, it’s really the supporting cast that steals The Lion King. Teaming Billy Eichner and Seth Rogen as Timon and Pumbaa is comedic gold and the two play-off each other in a way that truly makes the outcast animals seem like life-long friends. If anything, Eichner and his anxious energy may be the best casting in the film because Timon is constantly shooting off one-liners that feel tailor made for the actor’s dry tone. Keegan Michael-Key and Eric Andre are also great as Kamari and Azizi, but it’s Florence Kasumba as head hyena Shenzi who brings a sinister edge to the sadistic creatures. Even John Oliver, best known for his satirical late-night talk show Last Week Tonight, turns in a charming performance as Zazu, the overworked and overwhelmed red-billed hornbill who sits on the King’s Court. Having James Earl Jones return as Mufasa was a smart move on Favreau’s part because the actor does a magnificent job bringing the powerful, authoritative King back to the big screen, but I’ll admit that there were a few moments where he sounded a bit like Liam Neeson with some intense audio filters turned on.

It’s hard to even call The Lion King a live-action adaptation of the original. Filmed using new VR techniques that I’ll never fully understand, the film is one of the most beautiful computer-generated things I’ve ever seen. Not only does each creature look and move in an incredibly life-like manner, but each animal, from Simba himself to a random antelope, has distinguishing features and spots that mark it as unique. Thanks to evolving technology, the animals are so expressive one can easily notice a flash of jealousy flutter across Scar’s face or Nala dreamily gazing at Simba. The settings are so lush and gorgeous that it can be hard to remember the whole film was shot inside a bunch of warehouses in Los Angeles. Everything from the swaying trees to the flowing rivers seem so real it’s hard to believe Favreau and his crew didn’t literally parachute into a secluded location and shoot a new season of Planet Earth.

The crisp graphics also result in the movie seeming a bit darker than the original. Chiwetel Ejiofor turns in a cold performance to bring the conniving Scar to life, but his worn-down look also makes his overall appearance a bit scarier than before. Seeing animals duke it out in animation is undeniably cool, but seeing Simba and Scar come to blows above a fire, or a pride of lions confront a pack of hyenas, feels like a realistic, terrifying fight-to-the-death that can have a grimmer effect on audiences this time. Since each setting is so well-rendered the elephant graveyard that doubles as the hyena den is a terrifying, oozing place that is far creepier and menacing than in the original and lends itself to the chase sequence this time around being a lot more tense and engaging. Obviously the movie is still for kids, but The Lion King has the ability to scar children in a way that the original certainly didn’t.

Part of what makes the original movie so moving is the beautiful music and The Lion King certainly delivers on this promise. Hearing Han Zimmer’s original score as the camera whips around the pride lands is a powerful moment, but the film also delivers lighter musical moments like Donald Glover riffing on Hakuna Matata so audience members can alternate between tears and laughter. Since this movie is live-action, and supposedly more realistic than a cartoon, many of the musical numbers are a bit subdued compared to the originals. Simba never climbs on-top of a giraffe in I Just Can’t Wait to be King and Scar doesn’t belt out a full verse of Be Prepared for a hyena audience, but each song does a great job of digging deeper into the characters and the dilemmas — both internal and external — they are facing. 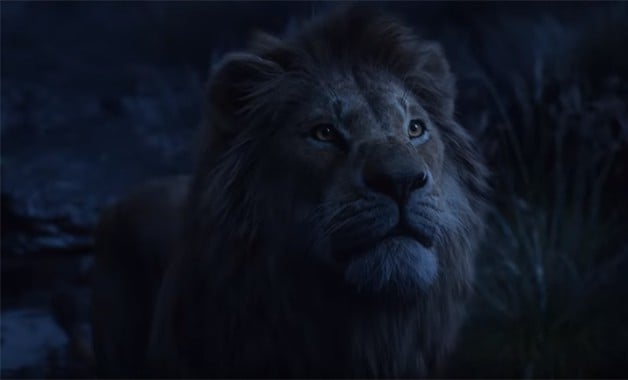 My major gripe with The Lion King is the dumbing down of the original’s larger spiritual messages. I’m not a religious person by any means, but the animated film has a powerful message that helped me come to terms with death at a young age. The Circle of Life is obviously mentioned and Rafiki (John Kani) plays a role in the film, but both feel more like items on a check-list that need to be included rather than authentic parts of this movie. As a result of this, even powerful moments like Simba’s vision of Mufasa in the stars don’t feel as significant as they did in the animated movie. If The Lion King developed these themes just a little bit more, this visually stunning adaptation would have ended up as compelling as the original. To be fair though, The Lion King did expand upon Hakuna Matata and made the contrast between duty/responsibility and “no worries for the rest of your days” even more stark.

Don’t let my minor gripe fool you: Disney and director Jon Favreau have done it again. Somehow, they took a delightful film and compellingly rewrapped it for modern audiences to discover for the first time. While it’s probably not as kid-friendly as the original just due to the realistic graphics, The Lion King is still a wholly entertaining movie with a lesson for everyone in the audience.