Crossovers. I’m a huge fan of them in general but they can be incredibly difficult to pull off. In comics it’s relatively easy coordinating creative teams, so long as they are all under the same publisher. However, crossovers between publishers are extremely rare as a result of coordinating the teams, the finances, and legalities of one company publishing something technically owned by another, etc.

The same is true in television. You hear fairly regularly of shows having crossovers with each other on the same network, like ‘Bones’ and ‘Sleepy Hollow’ did earlier this year. Sometimes, they are so common they are expected on a regular basis, like what The CW has managed to do with ‘The Flash’ and ‘Arrow,’ which have their annual crossover event as well as several, smaller crossovers on both shows. Inter-network crossovers are in an entirely different league however. Not only do you have the typical requirements; shooting schedules and cast/crew salaries, but you now get into cross-licensing deals and extensive contract negotiations on top of that.

With the recent announcement of ‘The Flash’ crossing networks from the CW to CBS’s ‘Supergirl’ it got me thinking of the frequency of tv crossovers in general. These type of crossovers were briefly brought up last year with ‘Arrow’ and ‘Gotham’ but that was explained as nothing more than a “fluke”. This year, fans of NBC’s ‘Constantine’ were treated to one, of a sort, when in an earlier episode of ‘Arrow’ Matt Ryan reprised his role as John Constantine. But it’s questionable if that even counts since NBC had already canceled the show by that time. 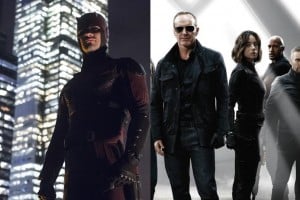 Notably, Disney owned Marvel Studios have movies, ‘Agents of S.H.I.E.L.D.’ and ‘Agent Carter’ on ABC, and ‘Daredevil’ and ‘Jessica Jones’ on Netflix (with two more shows on the way.). These all occur in the same universe, but only a handful of characters have appeared in both the movies and tv shows (Clark Gregg as Phil Coulson, Hayley Atwell as Peggy Carter, Neal McDonough as Dum Dum Dugan, and Jaimie Alexander as Lady Sif.) To date, only references to the rest of the canon have been made on the Netflix properties, though fans are eager for more connections to be made.

The only other time of semi-regular crossovers between networks that I was able to find was when ‘Buffy The Vampire Slayer’ and its spin-off show ‘Angel’ split up. They both started on The WB, but then with season six of ‘Buffy’, the show was moved to UPN and crossovers were a bit harder to come by, though they still happened. During ‘Buffy’ season 6 and ‘Angel’ season 3 references were sometimes made regarding each, but the characters didn’t actually appear on their sister show. The following year, Eliza Dushku as Faith appeared in both shows. Also, Alyson Hannigan as Willow appeared in one episode of ‘Angel.’ And finally David Boreanaz as Angel was allowed to appear in the ‘Buffy’ series finale. The following year, James Marsters as Spike, a series regular on ‘Buffy’ made the jump to cast member on ‘Angel’ for its final season.

According to Wikipedia, Richard Belzer, who played the character John Munch, is the only fictional character, played by a single actor, to appear on 10 different television shows. These shows were on five different networks. These include his original appearance on ‘Homicide: Life on the Street’ on NBC and ‘The X-Files’ on Fox as well as many others. Clearly, Belzer is an exception to the rule, and it took 22 television seasons to accomplish that feat.

Fans have been clamoring for Supergirl to crossover with at least one of the three shows that make up the Arrow-Verse  ever since it was announced that ‘Supergirl’ was green-lit and sharing some producers (notably Greg Berlanti and Andrew Kreisberg) with the Arrow-Verse. While you could make a case for Supergirl appearing with Green Arrow, or with the Legends of Tomorrow, most people seemed to think that she would fit in best with Grant Gustin’s Flash. Personally, I have to agree. They have a similar tone and both characters are traditionally more hopeful than compared to those on ‘Arrow.’

Finally, in early February, after months of both teases and denials, it was announced that the crossover was officially happening, with Gustin appearing on an episode of ‘Supergirl’ scheduled to air on March 28th on CBS in an episode titled “Worlds Finest.” It is wildly theorized that the Earth Supergirl takes place on will be in a separate universe from that of The Flash, seemingly supported by her cameo in a recent episode of ‘The Flash’ where Supergirl was briefly seen while Flash was traveling between dimensions. In the latest episode of ‘Supergirl’ we saw a Legion Flight Ring that was also in that ‘The Flash’ shot.

While I don’t expect to see another “Richard Belzer” I really hope that, if this goes well, that we will be treated to future crossovers between Supergirl and the other DC shows.

What do you guys think? Do you have any favorite inter-network crossovers? Are you excited for The Flash to meet Supergirl?