We’re probably going to get our first look at some footage from the seventh season of The Walking Dead during San Diego Comic-Con next week, but Entertainment Weekly has unveiled a never-before-seen image of Jeffrey Dean Morgan as Negan to help ease the wait. Speaking with the magazine, executive producer Greg Nicotero confirmed that Negan’s victim will indeed be revealed in the season seven premiere this October:

“Yes, who was at the receiving end of Negan’s bat will be revealed in the first episode.”

The director of the season six finale and the season seven premiere also talked about the fan favorite villain and teased his role in the upcoming season:

“He’s the kind of guy who imagines himself on stage at a high school production and he loves every second of it. So, I don’t really see a lot of quiet contemplative moments with Negan. I feel like with Negan it’s really going to be about him gesticulating and him sort of relishing in the sound of his own voice while he commands the stage in front of whoever’s alive.” 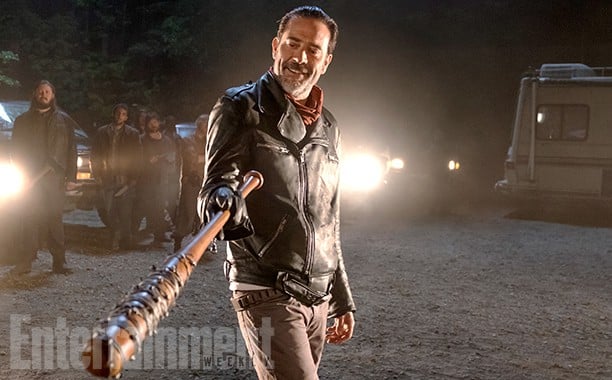 The Walking Dead will return on AMC sometime this October.