Details on the plots of both Thor: Ragnarok and Guardians of the Galaxy Vol. 2 have come to light from Joblo.

Speculation surrounding Thor: Ragnarok has been that the film will adapt some portion of the Planet Hulk storyline, and this indeed appears to be true. The report says Jeff Goldblum’s Grandmaster will be the character running the gladiator games Hulk is participating in. Hulk will also be wearing the one shoulder armor from the comics, so he might also have other attire similar to what he wore during the Planet Hulk storyline.

Thor is reportedly also getting a change in his appearance as he will be receiving a shaved head to some extent. Valkyrie will also be sporting a different look from the comics as she is typically a blonde-haired warrior, but Tessa Thompson will be wearing war paint on her face similar to Native American warriors. 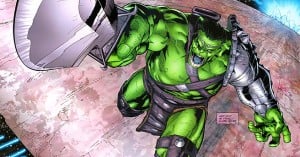 Other Thor: Ragnarok plot details from the report include Thor tracking down the ultimate weapon to prevent Ragnarok and reset the universe. The report is unclear as to what the weapon is and how Thor gets started on his quest, but it sounds like to us that the weapon could be another Infinity Stone.

Onto Guardians of the Galaxy Vol. 2, a villain has been confirmed. Rumors began in March that Guardians Vol. 2 would be featuring Ayesha aka Her aka Kismet aka Paragon in film as the primary villain, and according to the report this has been confirmed. As Elizebeth Debicki has not been linked to a character yet, it seems she will be playing the villain in the film.

Ayesha was created by the Enclave in the comics, a group of scientists who wished to control the world. The Enclave started their endeavor by creating the perfect genetic beings to restart humanity, the first of which being Him aka Adam Warlock, but he escaped the Enclave. Their second attempt, Her (Ayesha) also escapes to find Him who she wishes to mate with to begin the new perfect race. While it is unclear how much of Ayesha’s origin will be present in the film, she is indeed the main villain, and her presence hints at seeing Adam Warlock fairly soon as well. The report also confirms the Guardians of the Galaxy will appear in Avengers: Infinity War, which everyone figured to be the case already.