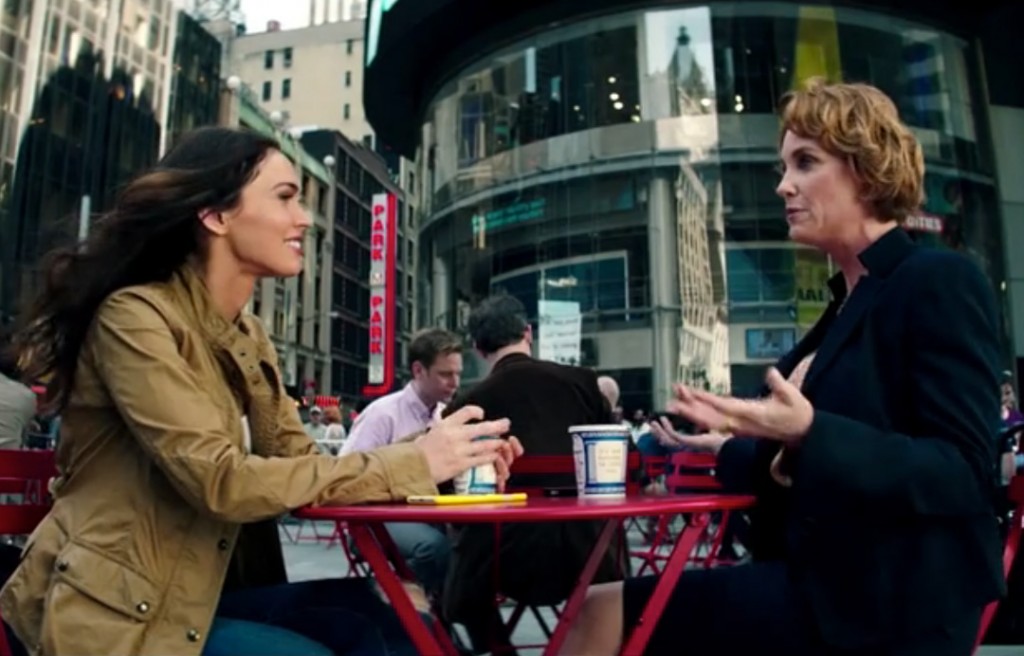 Judith Hoag, the actress who played the first silver screen April O’Neil back during the 1990 Teenage Mutant Ninja Turtles movie, was featured in a scene during the 2016 sequel TMNT: Out of the Shadows. The scene was unfortunately cut from the final version of the film, but features Hoag playing Rita, the boss of the modern day April O’Neil (Megan Fox).

In the scene, Vern (Will Arnett) tells O’Neil that their boss, Rita, wants to speak with her. He mentions that conversations with Rita go one of two ways: either you’re fired, or you’re promoted. We quickly find out Rita intends to promote April, by using her as the new face for the network. She says that April has been covering great stories and they’ve had a positive impact on the network’s ratings. She also mentions an insane seven-figure salary. Cowabunga, dude.

Rita ironically mentions that they “are both basically the same person”. O’Neil never actually has the chance to answer, but Rita takes that as a resounding yes and walks away. Make sure to check out the entire deleted scene here, via Yahoo! Movies. It is not mentioned why the scene was cut, as it seems strange that they would cut a fan service like this.

Do you wish they would have kept this scene in the movie? Make sure to let us know what you think down below in the comments.

Raphael, Leonardo, Donatello, and Michelangelo are back to battle bigger, badder villains, alongside April O’Neil and a newcomer: the hockey-masked vigilante Casey Jones. After supervillain Shredder escapes custody, he joins forces with two dimwitted henchmen, Bebop and Rocksteady, to unleash a diabolical plan to take over the world. As the Turtles prepare to take on Shredder and his new crew, they find themselves facing an even greater threat with similar intentions: the notorious Krang.

TMNT: Out Of The Shadows arrives on DVD and Blu-ray on September 20.