Toy Story, the first-ever computer-animated feature, put Pixar on the map back in 1995, and now, 24 years later, Toy Story 4 is here to solidify their position as the preeminent animated storytellers.

Starting with an action-packed flashback and endearing montage that brings audiences through everyone’s past before promptly dropping the toys in Bonnie’s playroom, Toy Story 4 is a brisk, charming movie that doesn’t waste any time. Packed into just 100 minutes is an entertaining story that touches on everything from searching for meaning to the difficulties of moving on from the past all while staying cheery and digestible for the kids.

At the center of everything is Woody (Tom Hanks) on a mission to keep his kid happy as she starts kindergarten. After Bonnie creates a new toy from some random trash at school, Forky (Tony Hale) becomes the most important thing in her life, and Woody takes it upon himself to make sure the confused, sometimes suicidal toy understands how important his position as lead toy is. A man on a mission, Woody is desperate to feel wanted again after his so-called glory days with Andy and he’s willing to do anything to find a sense of purpose. After reuniting with Bo Peep (Annie Potts), who has transformed into a badass and takes pride in being a “lost toy,” Woody is forced to reevaluate what is best for himself moving forward. Everyone’s favorite sheriff may just be a toy, but the problems he goes through, feeling lost and unsure of his future, are easy to empathize with and understandable.

Directed by Josh Cooley, his first feature-length directorial credit, Toy Story 4 feels fresh and exciting despite being the fourth entry in the franchise. Cooley, who worked on storyboards for everything from Ratatouille to Up and even wrote the screenplay for Inside Out, understands what makes Pixar movies special. The director uses physical comedy to great effect and does a great job framing tense sequences in unique locations like an antique store or carnival. Cutting between the various groups of toys at exactly the right time, Cooley ensures the movie never lulls or overstays its welcome. 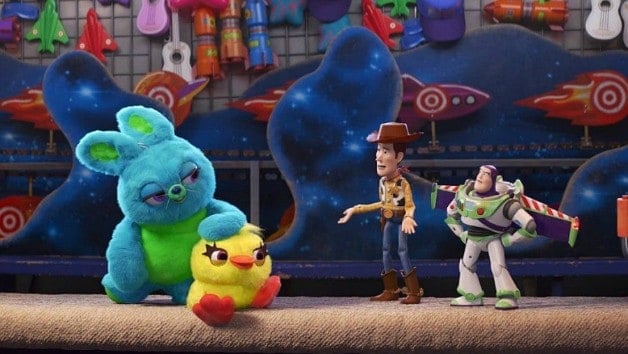 Part of what makes Toy Story 4 such a treat is the new crop of supporting characters. Buzz Lightyear has a downsized but important role here and classic characters like Rex (Wallace Shawn) and Jesse (Joan Cusack) are featured, but a lot of time is spent developing new characters. Forky is an insecure, confused toy who goes through one hell of a character arc and his blank, cordial personality leads to some hilarious interactions with the other toys. Probably the best addition to the world is Duke Caboom (Keanu Reeves), a Canadian stunt-man who loves to strike a pose. A perfect casting choice, Toy Story 4 features a fantastic reunion between Jordan Peele and Keegan-Michael Key as Bunny and Ducky, two plush toys who tag along with the crew and are more than willing to resort to violence when necessary. The film’s primary antagonist, Gabby Gabby (Christina Hendricks), is a misunderstood doll with a clear motivation and tragic story that makes it hard to root against her.

Like all the best Pixar movies, Toy Story 4 delicately and effectively moves between tear-jerking moments and knee-slapping hilarity. At one moment, Bunny and Ducky are voicing their plan to assault an old woman and the next audiences are forced to watch toys get rejected by children. Tears were rolling down my face for a solid chunk of the movie but I’m still not sure if I cried more from laughter or emotional duress.

It seems redundant to compliment the animation in a Pixar movie, but Toy Story 4 is truly one of the most beautifully rendered films I’ve ever seen. Not only is each character well textured and incredibly detailed, but the settings, especially far-off in the background, all look magnificent. Production on Coco pushed Pixar to develop new lighting techniques and they were used to magnificent effect here as all the shading and background lights bring marvelous depth to each shot.

Bring your friends, kids or parents because there is literally something here for every age group to enjoy. With some new, lovely music from Randy Newman to cap off the franchise, there’s really nothing to complain about in Toy Story 4. While there is always a chance Disney could return to the toy chest in a few years, and there are still plenty of interesting places to take this series, Toy Story 4 is a delightful sendoff for the classic franchise.