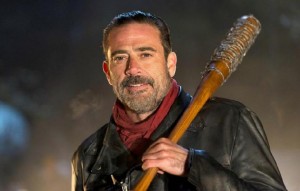 When Negan made his debut on AMC in the season 6 finale, a central part of the character didn’t make the televised cut– his use of the f-bomb. Well this has now been remedied, as leaked footage of the uncensored Negan introduction has made its way onto YouTube. And as you may expect, it contains a lot of profanity.

23 f-bombs in total are dropped by Negan in the span of under 11 minutes, and they definitely make a difference. While the majority of his introduction is identical, the vulgar language really gives his character a different feel. Removing the awkward words placed into the televised version and using the profanities which were originally there also helps the flow of the dialogue. But don’t take my word for it, check out the leaked footage below.

AMC will be officially releasing this footage with the release of the sixth season on Blu-Ray and DVD this Tuesday. The bonus features will also contain commentary on the episodes and reveal plenty of fun moments from the set. It will also contain a behind-the-scenes into the making of some of the more difficult scenes from this past season.

The Walking Dead will return on October 23rd on AMC at its usual time-slot of 9pm EST.