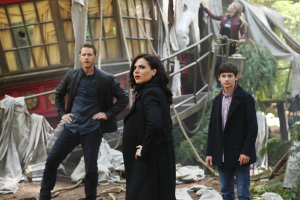 Hello Oncers!  We are just over a week out from the premiere of Once Upon A Time! One of the biggest pieces of the aftermath of the Season 5 finale will be how Regina and co. will handle the Evil Queen. With the Evil Queen waging war on Storybrooke and after everyone’s happiness, it sure won’t be easy for the Charming/Mills/Swan family.

Straight to you from the EW Spoiler Room, we have some more information on what we can expect out of the Evil Queen when we return to Storybrooke. Specifically, how does her presence impact the royal family? Executive Producer answered EW’s question:

You get to see that this really is a family that has come together. Henry’s dream in the beginning was to bring everyone together, and in a lot of ways he has, but this year they’re going to be tested from their past. If there’s one thing the Evil Queen hates it’s Snow White — Snow White and other people’s happiness.

Hopefully Regina (Lana Parrilla) can step in and stop the Evil Queen; since the Evil Queen is a part of her. This literal splitting of herself plays into Regina always being her own worst enemy and getting in her own way. Can she finally redeem herself?  I am very excited to see how this dynamic will play out.  In the meantime, Snow (Ginnifer Goodwin) needs to prepare herself for the fight of her life as she and the rest of her family will be tested by their pasts.

Once Upon A Time returns to ABC on Sunday, September 25th.