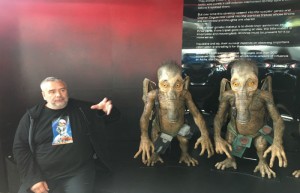 At New York Comic Con, I, along with several other members of the press, got the opportunity to speak with director Luc Besson about his upcoming film Valerian. During the talk, he revealed that the public would first see a teaser trailer on November 10th.

The director went on discuss how the visual effects are still in the early stages so it is hard to show much as this point, however the press did get to see six minutes of footage from the film. As a result, the first teaser will not release until November, while a second is likely for January, and a full trailer in March.

From the footage and further discussion with the director, we got to learn a bit about the plot of the film and how closely related it will be to the French comic it is based upon. Essentially, the film revolves around two space cops trying to retrieve an item of importance from a market with millions of shops that exists on several dimensions at once. The film is visually and technically groundbreaking with three different special effects teams all working on the film, trying to one up each other. The French comic is vastly expanded past for the film, but Valerian will still retain the central themes and comic creator Jean-Claude Mezieres said he did not feel betrayed by the films portrayal what-so-ever.

Valerian (Dane DeHaan) and Laureline (Cara Delevingne) are special operatives for the government of the human territories charged with maintaining order throughout the universe. Valerian has more in mind than a professional relationship with his partner – blatantly chasing after her with propositions of romance. But his extensive history with women, and her traditional values, drive Laureline to continuously rebuff him. Under directive from their Commander (Clive Owen), Valerian and Laureline embark on a mission to the breathtaking intergalactic city of Alpha, an ever-expanding metropolis comprised of thousands of different species from all four corners of the universe. Alpha’s seventeen million inhabitants have converged over time – uniting their talents, technology and resources for the betterment of all. Unfortunately, not everyone on Alpha shares in these same objectives; in fact, unseen forces are at work, placing our race in great danger.

Valerian and the City of a Thousand Planets will fly into theaters on July 21st.